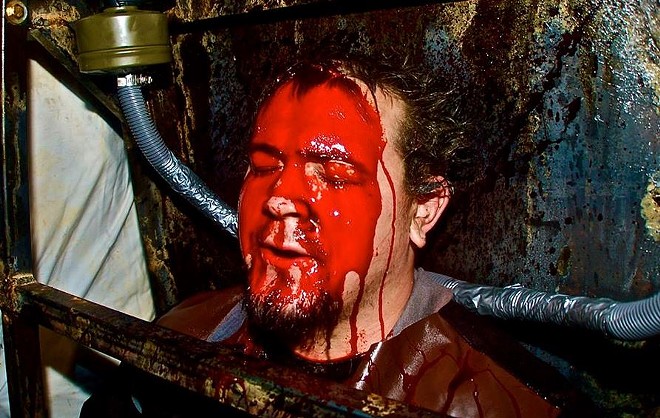 For a certain kind of adrenaline junkie, the mere name "McKamey Manor" is enough to raise goosebumps. Its creator, Russ McKamey, is considered a genius in some circles for his twisted and brutal take on the classic haunted house experience, which ups the ante by throwing participants in torture-like conditions for up to eight hours. Slogan: "Live Your Own Horror Movie."

After fourteen years in San Diego, McKamey announced earlier this summer that he was moving the operation to the small southern Illinois town of McLeansboro, just a two-hour drive from St. Louis. Considering the manor draws customers from all over the globe, it might as well have been moving to our very backyard.

And while St. Louis already boasts a well-regarded slate of haunted attractions, McKamey Manor is in a league of its own. It has been consistently ranked among the best "extreme haunts" in the world, and its reputation is bolstered by a rabid fan base. Of course, McKamey has also attracted critics who say he's little more than a sadistic madman.

It only took a few a weeks for controversy to erupt around McKamey's plans in McLeansboro.

"As soon as we got there on July 10 it started getting ugly. All hell broke loose," McKamey says. "So much hate and venom, they were throwing bricks through the window, shooting the window out and praying in front of the building."

The building that McKamey planned to relocate was a warehouse owned by Patricia Irvin, who offered to lease the property to the horror impresario. But she now says that she made the agreement without ever having watched videos of McKamey's work.

Still, even after watching the grisly spectacles featured on the McKamey Manor YouTube channel, Irvin says she wanted to honor the deal she'd made with McKamey. But opposition to the venture sprouted almost immediately. Commenters on the local news coverage voiced concern that a known psychopath was about to open a torture house in their quaint town. Facebook groups were created to marshal further support for keeping McKamey Manor out of McLeansboro.

Then the vandalism started. Irvin says someone shot out windows and slashed the tires on her car. The building also attracted protesters and public prayer demonstrations.

"We were getting multiple threats, things like 'We're going to burn down the building'," she says.

By early August, McKamey and Irvin decided pulled the plug. Interviews with both parties indicate that other factors were at play in addition to local opposition: Irvin says McKamey made little effort to build relationships with the town's residents and leaders, and she claims he failed to install a sprinkler system after the fire marshal's inspection. Ultimately, she blames McKamey for abandoning the project and leaving his partners in the lurch.

McKamey has his own ax to grind. He says that he left $35,000 worth of equipment in Irvin's building, including high-end speakers and props. Irvin declined to comment on the status of McKamey's equipment.

So what does the future hold for McKamey Manor? Whatever it is, it won't be happening near St. Louis. McKamey says he's found a suitably isolated location for his house of horrors, but he's not ready to say where it is yet.

"This has kind of put a bump in the road," he says. "McLeansboro looked like a great spot, we were all ready to go. And then all hell broke loose."