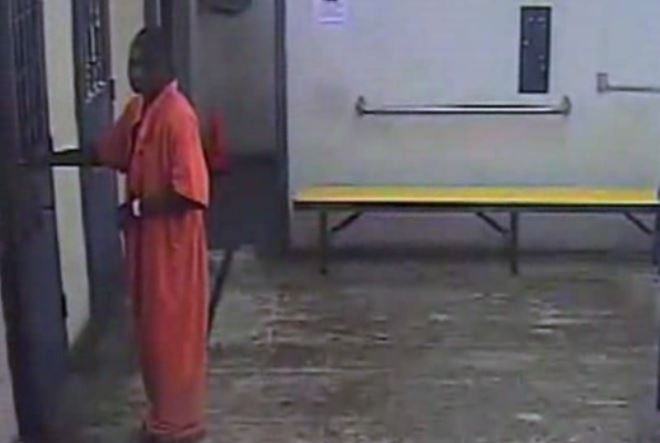 Pine Lawn is no shining city upon a hill. Its former mayor pleaded guilty to extortion, its top police officer is facing accusations of rape and its court system preys on the town's poorest residents.

But surveillance footage suggests that — contrary to speculation roiling the Internet — Pine Lawn's sins do not include staging a fake suicide to cover up for jailhouse abuse.

The footage, obtained by the St. Louis Post-Dispatch, allegedly shows the moment that Bernard Scott used a shoelace to try to hang himself from the bars of his cell door last September. Just minutes before, officers had sent the 44-year-old back to his cell. A police supervisor, acting against the instructions of a paramedic, had decided that Scott could not be transported to an emergency room to treat abdominal pain and bleeding — because, yes, Scott still owed $360 in bail for unpaid traffic tickets. (Those tickets, by the way, were related to minor traffic infractions, such as rolling a stop sign, dating back to 2004 and 2005.)

The Post-Dispatch's Jeremy Kohler broke the story last week, describing how the seemingly callous supervisor rebuffed a paramedic's concerns that Scott needed immediate medical attention. According to an EMT report, another ambulance was called to the Pine Lawn jail fourteen minutes later, but this time for a more serious emergency: Officers said they found Scott hanging from his cell door with a shoelace around his neck.

Scott fell into a coma and didn't regain consciousness for more eleven days. In an interview, Scott told Kohler that he doesn't remember the suicide attempt.

“Why would I hang myself?” Scott asked. “I was in on traffic tickets.”

The initial Post-Dispatch story, published September 11, leaves that contradiction to stand on its own; Scott's word against accounts of jail workers and officers on duty at the time. Not surprisingly, many were suspicious.

One commenter on the story wrote, "I think we all know police beat the hell out of this man then tried to stage a suicide to cover themselves. " Another posted, "Virtually the only time people 'hang themselves' is in jail when jailers don't want them to talk about something. It always smells to high heaven of a cover up."

Their suspicions are somewhat understandable. Scott's case resembles, in part, the death of Sandra Bland in a Texas jail this summer. Locally, the death of a 21-year-old woman in the Pagedale jail raised similar questions from her family and friends.

On September 11, the same day the Post-Dispatch story ran, Counter Current News ran its own coverage under the headline, "Police Arrested Him For Minor Traffic Violation, Then Faked His Suicide, But He SURVIVED."

You might recognize Counter Current News from your Facebook feed, where its clickable stories of police abuses and progressive issues compete with similar offerings from sites like Addicting Info and The Free Thought Project.

"Did the police do this to cover up their negligence? It certainly seems that way based on the evidence and the first hand report by Scott," concluded the story's author, listed only as M. David. "The real question now is why this story isn’t already headline news? Let’s up change that: SPREAD THE WORD!"

Counter Current News has yet to post an update or acknowledge that new video evidence indicates Scott did in fact attempt suicide.

It's not clear why Scott claimed he had no memory of the suicide attempt. But whatever the reason, the discrepancy doesn't negate the horrific implications of the incident itself — that Pine Lawn officers and jail workers stood by while an ailing man needed assistance, all because of unpaid traffic tickets.

For more on this story, check out the Post-Dispatch's initial coverage and the update published yesterday. Here's a video featuring Kohler narrating through the jailhouse surveillance footage.