A city parking enforcement officer is suspended and under an internal investigation by the Office of the Treasurer after a local blogger pointed out some seemingly odd behavior she engaged in last month.

On August 11, Steve Patterson of the Urban Review STL blog noticed a Ford Edge parked downtown on Locust between 15th and 16th streets. It had a yellow parking ticket envelope stuffed under a windshield wiper. Nothing strange there.

But the next day, he noticed the same Ford, in the same spot, with another yellow ticket envelope. He also noticed a parking enforcement officer in a city vehicle right behind the Ford. Patterson stopped to watch, assuming she would put a boot on the car.

That's not what she did.

On August 24, he again saw the Ford — and again, it had a yellow envelope. He went over and pulled back the envelope. The ticket was blank. (See photo above.) He took a picture of it at about 1:30 pm.

Patterson returned to his loft, about a block west. A couple of hours later, he went back down to the sidewalk and waited. Sure enough, at 3:43 p.m., the officer pulled behind the Ford, got out with the blue bag, and placed it inside the Ford. He took the following photos: 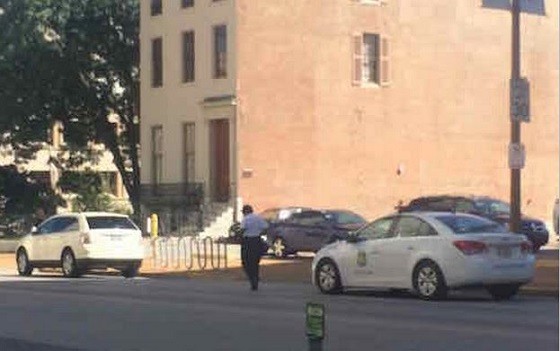 On August 26, the blogger again saw the Ford and approached it, only this time a man in a red shirt and white shorts appeared and started yelling at him things like "Why you fucking with my car?” and “You’d better mind your own fucking business!” he says.

"He was very furious at me," Patterson tells Riverfront Times. "I was kind of afraid, so I left."

Patterson called the police and the Office of the Treasurer, which oversees the Parking Violations Bureau.

The officer is now the subject of an internal investigation and therefore suspended, which is bureau policy, according to Makita Abraham, a public relations representative for the Treasurer.

Abraham says the 31 enforcement officers in the Parking Violations Bureau don't collect any money, let alone in blue bags. Asked if it was normal for an officer to issue a blank ticket, she said only, "We're looking into it."

One wonders: If this was something sinister or criminal, why would the officer choose to do it in broad daylight, right in front of the YMCA - Downtown's parking lot? Then again, if there was an obvious and simple explanation, why was the officer suspended for an official internal investigation?

"It could be totally corrupt," says Patterson. "Or it could be nothing."