Now a Free Man, Cornell McKay Sues the Police and Prosecutors Who Jailed Him 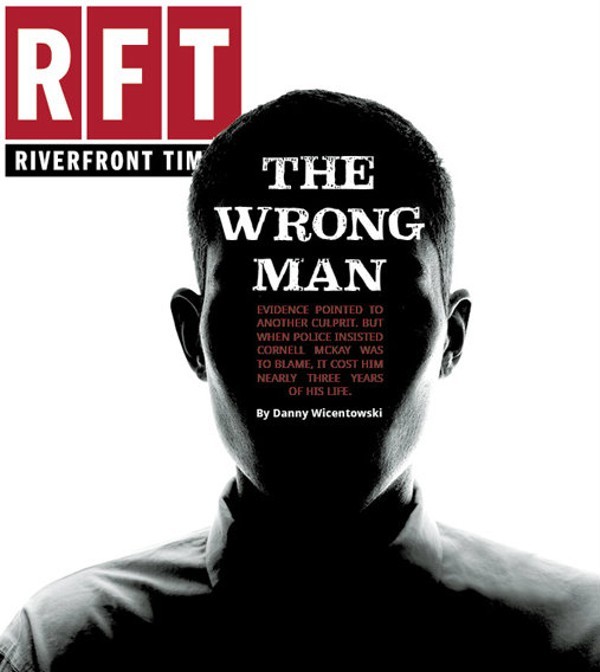 Those are just a few of the allegations presented in a federal civil rights suit filed Tuesday by attorneys for Cornell McKay, a 23-year-old aspiring artist who spent nearly three years in jail before an appeals court overturned his robbery conviction in December 2014. After the prosecution's main witness refused to participate in a new trial, the Circuit Attorney's office dropped its charges against McKay. He was released from prison on May 7.

The suit alleges that McKay was framed as the perpetrator of an August 10, 2012 mugging in the Central West End, in which a woman was robbed at gunpoint for her cellphone and cash. The stolen cellphone was later found to be directly linked to Keith Esters, who's now serving a life sentence for murdering former SLU athlete Megan Boken during a similar cellphone robbery in the Central West End on August 18, 2012.

Had detectives done their jobs after the August 10 robbery, McKay's lawyers argue, they would have found Esters before he killed Boken.

The lawsuit attempts to frame the case against McKay as rotten from ground up, from the detectives who initially investigated the August 10 robbery to the spokesperson for the Circuit Attorney's office.

According to the suit, "Detectives from the 9th District of the St. Louis Metropolitan Police Department deliberately framed [McKay] to deflect blame from themselves for the circumstances that led to the murder of Megan Boken eight days later. Had they pursued known evidentiary leads, including the incoming and outgoing calls from the victim’s cell phone, they would have identified Keith Esters as the perpetrator of the robbery and apprehended him before he shot and killed Megan Boken days later."

The suit continues,"Prosecutors knowingly and willingly joined the conspiracy by covering up the unlawful acts of police and presenting known falsehoods to [McKay's] jury and the trial court."

Among other things, the suit seeks an unspecified payout for attorney's fees, loss of income, defamation and violations to McKay's right to due process.

"I think the petition speaks for itself," says Thomas SanFilippo, one of McKay's lawyers. "And I speak for all of us when I say we're motivated and proud to be seeking justice for our client."

In a statement to the St. Louis Post-Dispatch, St. Louis Circuit Attorney Jennifer Joyce said she had not yet read the lawsuit but has "every confidence the courts will find it without merit.”

Joyce has consistently maintained that McKay is the true culprit who committed the August 10 robbery.

"We believe Cornell McKay committed this robbery, we have no doubt about that," Joyce said on May 6, the day her office dropped the charges against him.

Riverfront Times dug into the twisting and dramatic tale of McKay's arrest, trial and eventual release in a May cover story, which you can read here.