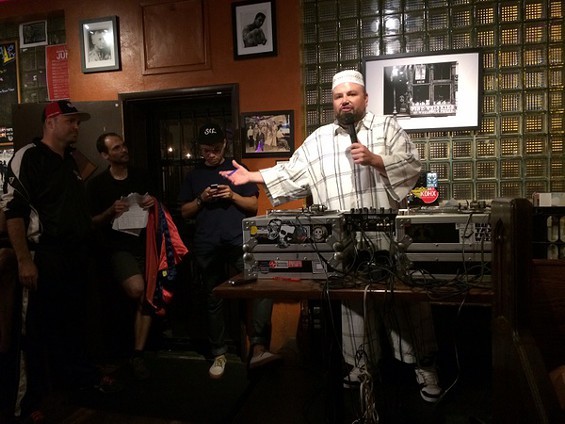 Umar Lee, the outspoken cabbie/activist/writer who's become one of the loudest voices arguing that ride-sharing operations Uber and Lyft are bad for St. Louis, has been fired his job at Laclede Cab. The termination came after Lee's public efforts to document what he calls a "climate of racism and harassment" in St. Charles County, which we reported on earlier today.

"Responding to right-wing trolls, Laclede Cab fired me today," Lee tweeted this afternoon. "There is no job that is worth me surrendering my freedom of speech."

Over the weekend, Lee visited a St. Charles subdivision after a black family there claimed they were being harassed by racist white neighbors. Lee's attempts to interview the neighbors ended with him arguing with a police officer over the definition of trespassing, and the story was given lengthy treatment by the St. Louis Post-Dispatch.

Apparently, this was the final straw for Lee's employer, Laclede Cab. Lee, a cab driver for more than a decade, immediately announced his termination and called out the company on Twitter.

Responding to right-wing trolls @LacledeCab fired me today. There is no job that is worth me surrendering my freedom of speech.

There are some good people at @LacledeCab and some bad people. Good memories and bad.


Then he let loose with both barrels:

Sam Standley, the child-rapist, got hired because his dad Jerry, a real sociopath, was the president of @LacledeCab

Sam Standley is the controller of Laclede Cab — and also appears to be listed in the state's sex offender registry. (The Standley within the state registry lists his work address as 600 S. Vandeventer, which matches the cab company's address.) His father, Jerry Standley, was president of Laclede Cab for 30 years before retiring in 2006.

When we called Laclede Cab's business office, the woman who picked up said that company president Adam McNutt was the person we'd need to talk to about Lee's termination. She said McNutt wouldn't be in the office until tomorrow.

Lee's firing generated numerous sympathy tweets, including those from local journalists and politicians. Many expressed outrage that Lee was terminated for expressing his views outside of work.

I have recommended @STLAbuBadu for one cab job already. I don't have a journalism job to offer him but highly recommend him.

As did freelance journalist Sarah Kendzior, who's shared a byline with Lee on a few feature stories chronicling the legacies of racism in St. Louis' north and west counties.

Disgusted that @lacledecab fired @STLAbuBadu for his protest actions in St. Louis. We should boycott. #STL https://t.co/7V39kNuFLr

Here is an article @STLAbuBadu and I wrote about racism in St Charles county http://t.co/uPTWabo6kE He just got fired for protesting it

@STLAbuBadu This should have never happened to you. This is wrong. Sadly, this is sooooo St. Louis

We've reached out to Lee for comment, and we'll update the story when we hear back.