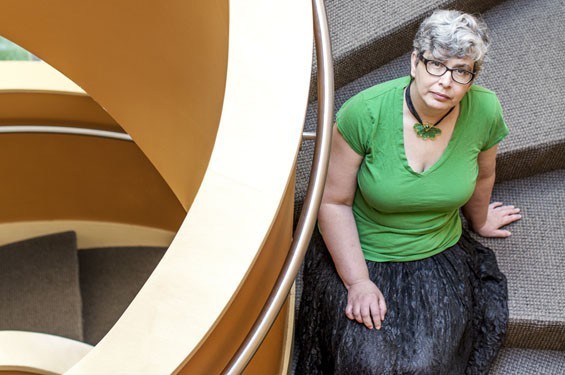 "That would be fabulous," says the Shrewsbury-based author, whose second book, Ancillary Sword, is nominated for this year's Hugo Award for Best Novel. "My money's on [Sarah Monette's] The Goblin Emperor this year. But I'm not going to lie, I would be absolutely thrilled to win the Hugo again."

On Saturday, Leckie will join hundreds of other science fiction fans in Spokane, Washington for the World Science Fiction Convention (aka Worldcon), where the Hugo winners will be announced. Last year, in London, Leckie's Ancillary Justice took home the Hugo for Best Novel. She is the first author — ever — to win the Hugo, Nebula and Arthur C. Clarke awards in the same year.

Like 2014, this year in science fiction has been dominated by a small group of authors who believe the genre is losing its soul to liberals, women and minorities. Much of that criticism is directed at the Hugo Awards for its perceived bias toward writers like Leckie, whose treatment of gender and language seems to irk traditionalist sci-fi fans.

"Someone said my book was a smack in the face to normal people," says Leckie, who was profiled last year in a Riverfront Times feature story. "I was like, 'Oh, get over yourself.'"

Leckie's novels — which comprise the "Imperial Radch trilogy" — represent the kind of science fiction many would like to see more of. The series takes place amid a galaxy-spanning empire that uses "she" as the default pronoun. The books' main character, Breq, is an artificial intelligence who once inhabited a massive troop-carrying spaceship, but was forced to transfer her consciousnesses to a reanimated corpse when the ship was destroyed. The final book in the trilogy, Ancillary Mercy, is due out in October.

"It's not quite as contemplative and its certainly a bit more action-y," she says, comparing Ancillary Mercy to Ancillary Sword. "I think it moves at something of a faster pace. It does tie everything up."

As for the current Hugo Award controversies and the future of the science fiction, Leckie is characteristically hesitant to declare victory for the boundary-pushing, diversity-embracing side of the genre.

"As I've said before, a lot of times it feels like a sort of gold fish memory, like 'Oh look at all these women, it's really changing,' and then three minutes later, 'Oh look at all these people of color, it's really changing.' If nothing else, last year's Hugos were really interesting in how women writers, writers of color and different themes of stories were were being acknowledged openly by the community and being honored. That has really been fabulous. I'm hoping that continues."

That doesn't mean she's not concerned by the organized push from some authors to overtake the Hugos with bloc-voting tactics and an army of online trolls.

"It's hard not to interpret some of the stuff that's gone down in the last year or two as kind of a backlash. It happens because things have been getting better," she says. "That's when certain quarters feel threatened."

Update: Ann Leckie did not take home her second Hugo. She tweeted her congratulations to Chinese author Cixin Liu, who won Best Novel with The Three Body Problem.