Missouri's Supreme Court Has Shut Down the City's Red Light Cameras. Now What? 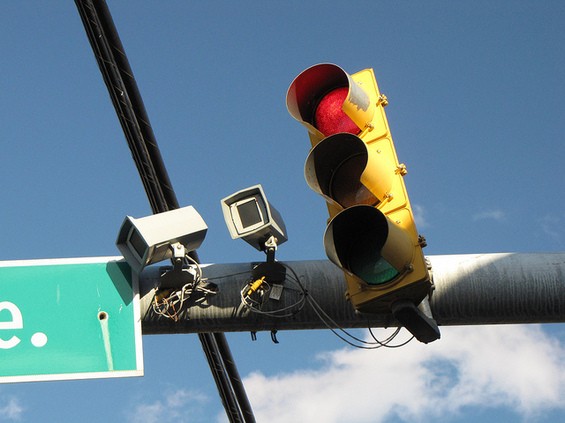 According to City Hall spokeswoman Maggie Crane, it means no further tickets will be issued for now. If you received your red-light camera ticket within the last year and a half, don't pay the fine. If you've already paid such a fine, you'll get that money back.

That's because in February 2014, Circuit Judge Stephen Ohmer recognized the legal ambiguity around the matter and allowed the city to keep collecting the fines, but mandated the money be temporarily placed in an escrow account pending a decision by the Supreme Court.

Yesterday, we finally got that decision. Our state's high court ruled that the red-light camera ordinance violates the constitution because it essentially forces an innocent car owner to prove the he/she wasn't the one driving the car.

A footnote in the opinion does reveal what a valid ordinance would look like: "If the red light camera system took photographs of the driver.... the city could use the photographs to prove the identity of the driver."

Crane declined to comment on how a new ordinance -- or new technology -- would accomplish such a feat.

She did defend the concept of red-light cameras in an email to Riverfront Times, stating: "Cities put up traffic signals to prevent crashes and to keep traffic moving smoothly. Not enforcing them would defeat the purpose of having them. The Chief would rather not divert police officers from patrolling neighborhoods and fighting crime."

Crane also sent us some data suggesting that the cameras improve drivers' behavior -- and that the lesson sticks.

"Between May 2007 and November 2013," she wrote, "the number of citations issued decreased by 63 percent. Eighty-Four percent of red-light runners, who are cited and pay the fine for violating the City's red light camera safety ordinance, do not get a second ticket."

Bevis Schock, an attorney who has fought against red-light cameras in court, told RFT that he welcomes the news, but also expects the city to come back with another ordinance.

"It's never over," he said. "They'll find a way to weasel it back in. The public hates these things, and we beat them fair and square. So they should sit down and shut up."