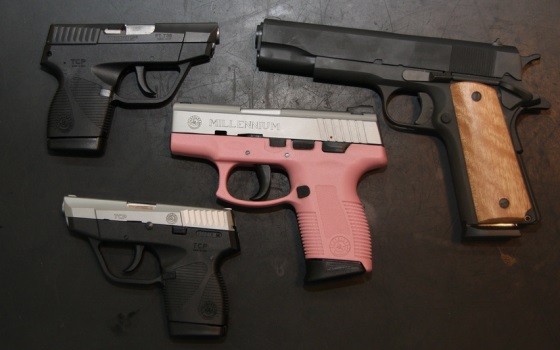 With gun violence roiling the city, Board of Aldermen President Lewis Reed and others are trying to launch a gun buyback program. That's remarkable for three reasons.

First, the plan — which is still being finalized but would include a buyback and other outreach elements — has support from St. Louis Metropolitan Police Chief Sam Dotson, as well as from Bruce Franks, a community organizer and founder of 28 to Life, an anti-violence group geared toward youth.

Secondly, Reed has said he wants to crowdfund the buyback online — seemingly a first in St. Louis.

Finally, they are attempting to do this in the face of a state statute that practically prohibits it.

In 2013, Missouri's General Assembly passed a law attaching a pair of conditions to any buyback: A municipality must explicitly approve the initiative through an ordinance or resolution, and any guns collected must be offered for sale or trade to at least two licensed dealers before being destroyed.

Reed cleared the first hurdle in January 2014 when he pushed through a resolution authorizing gun buybacks.

As for the second hurdle, Reed's legislative director Michael Powers declined to give specifics, saying only Reed is "confident" he can work around it.

"There is an unfortunate disconnect between the needs of city residents in both St. Louis and Kansas City on the one hand and priorities of out-state legislators in Jefferson City on the other," Powers told Riverfront Times in a text message. "We must look out for the well-being of our children before the livelihoods of gun dealers."

Reed plans to pull off the initiative through Gun by Gun, a San Francisco-based online platform. Gun by Gun works like this: Local volunteers convince their neighbors to donate through the website, and the donations are used to buy back the guns, no questions asked, with cooperation from police. Gun by Gun boasts of having already held five successful campaigns in four different cities, wherein a combined total of $80,000 was raised to buy back 750 guns.

That's only a fraction of the guns turned in during St. Louis' last buyback in 1991. That initiative brought in 7,547 guns, according to St. Louis Post Dispatch archives. About 560 (or 7.4 percent) of those guns turned out to be illegal — whether because the barrels were sawed off or serial numbers were erased. Eighty-five (or 1.1 percent) were stolen.

The effectiveness of gun buybacks is a matter of dispute (see here and here). Again, Powers declined to get into the details of Reed's proposal, but hinted that the campaign would specifically target young people and "connect the buyback with new opportunities and resources." Franks has joined the effort partly as a result of his personal history. Back in 1991, his nine-year-old brother, Christopher Harris, was shot and killed by a drug dealer in the Forest Park Southeast neighborhood. The killing sparked a public outcry, leading to the first buyback that same year.

Franks was only six years old at that time. Now he's 30 and runs 28 to Life, a grassroots organization that addresses violence from several angles: On one hand, it urges police to work more humanely with teens, and on the other, it urges teens to rise up as leaders even in neighborhoods that are plagued by violence.

Franks recently met the founder of Gun by Gun, Ian Johnstone, at a conference in Chicago and expressed interest in bringing the program to St. Louis. Johnstone put him in touch with Reed, who had already passed the necessary resolution.

Franks believes the buyback must be accompanied by other elements. For example, he would like to see St. Louis Agency on Training (SLATE) come with a job fair, and the Urban League put on a resource fair. He also would like to see the Circuit Attorney's office to work out a deal with gun sellers who have non-violent offenses to do serious community service in exchange for clearing their record of warrants.

RFT asked Franks if all this talk of a new initiative has brought back memories of his family's loss.

"It doesn't refresh anything, because it's always fresh" says Franks. "What we're doing is keep his legacy alive, and it will hopefully keep others alive, both victims and people that want to do harm. I think the gun buyback could save both."