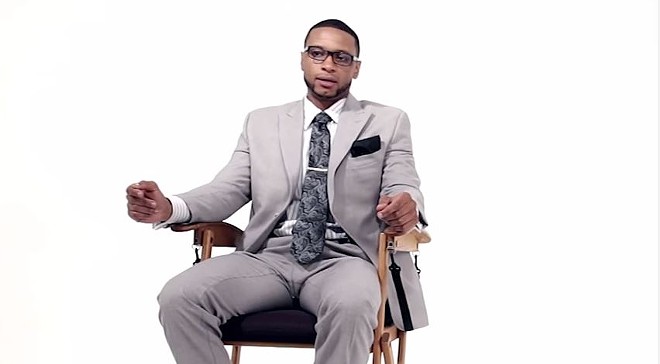 Devin James is back.

In a memoir published earlier this month, the fired PR representative for Ferguson blames city leaders, police officials and politicians for their failures in the aftermath of Michael Brown's death. Marketed with his characteristic flair, the book, Inside Ferguson: A Voice for the Voiceless, also appears to function as a public relations vehicle for James himself (as memoirs usually do).

The publisher touts the book as "an explosive missile of truth from a man uniquely positioned to uncover the real mechanics of damage control and race relations.... James's account will make you question the progress America has made in the quest for racial equality and reflect upon the true meaning of 'Black Lives Matter.'"

James, readers may recall, served as Ferguson's point-person for media inquiries and public relations until September 26, 2014, the day when the St. Louis Post-Dispatch revealed James had been convicted of a felony for fatally shooting an unarmed man in 2004. After the news broke, the St. Louis Economic Development Partnership, which had officially hired him, cancelled James' contract.

James' firing, however, was hardly the first bump in his employment with Ferguson. He was the mastermind behind former Ferguson police chief Thomas Jackson's disastrous (and widely mocked) video apology to Michael Brown's family.

James also did himself no favors when he engaged in an ill-advised Twitter spat with Post-Dispatch reporter Paul Hampel, who remarked that "Ferguson could not have chosen a more tone-deaf spokesman."

Ten months later, James now seems to be doing a bit of re-branding. In the book's promotional blurb, James' firing is described as "character assassination that occurred when James refused to play along" with Ferguson's inept and duplicitous city leaders.

Here's the book's trailer, which presents James as a kind of savior figure against scenes of burned-down Ferguson businesses.

We should note that James is currently suing St. Louis public relations firm Elasticity for breach of contract. He alleges that the firm failed to pay his company, Devin James Group, for its work in north county St. Louis. The case will go to trial next month.