Transgender Hookers Are Out for Justice, Friendship in Tangerine 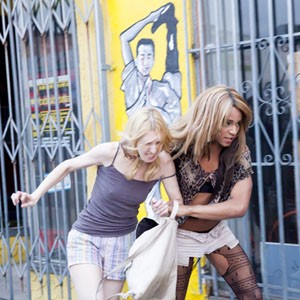 Shot on an iPhone 5s modified with a widescreen lens adapter, an $8 image-control app and a Steadicam rig, Sean Baker's Tangerine has become so closely identified with its unique means of production that the wild and abundant pleasures of its narrative and the inclusive, groundbreaking nature of its cast have received inadequate celebration.

That's to a degree understandable -- Baker and co-cinematographer Radium Cheung certainly deserve their accolades for the film's budget-dictated innovations and its feverish, color-saturated beauty -- but it's the freshness of Tangerine's storytelling that truly holds our interest and elevates the work from the category of technical curiosity.

A melancholy comedy -- extremely funny from moment to moment but imbued with an overall sadness, its SoCal sunshine clouded by the constant threat of catastrophic heartbreak -- Tangerine takes place over a single day, a not-very-merry Christmas Eve, in a distinctly unglamorous precinct of LA, with the story unfolding at such mundane, downscale locales as a doughnut shop, Laundromat, car wash, taxi-cab interior and hourly rate motel. Although the film is very much an ensemble, its central characters -- and emotional core -- are a contrasting pair of transgender sex workers, volatile Sin-Dee (Kitana Kiki Rodriguez) and calming Alexandra (Mya Taylor), and scenes with them appropriately bookend Tangerine.

Just released from a stretch in lockup, an outraged Sin-Dee discovers in the film's opening minutes that boyfriend-cum-pimp Chester (the sleazily charismatic James Ransome of The Wire's second season) has been dallying in her absence with another girl in his stable. The sexual betrayal is made all the more egregious because Chester is cheating on her with a "fish" -- i.e., a biological woman -- and Sin-Dee sets off in angry pursuit of her betrayer and his new side piece, with Alexandra now and again in reluctant tow. Vigorously stalking the city's mean streets and visiting Chester's usual haunts, Sin-Dee first locates her rival, Dinah (Mickey O'Hagan). Press-ganged into aiding in the hunt for the elusive Chester, Dinah provides amusingly cynical, dyspeptic commentary as Sin-Dee drags her forcibly about the city. The film adds yet another significant voice to its noisy chorus in Razmik (Karren Karagulian), a married Armenian cabbie with a taste for trans prostitutes; his peregrinations occasionally intersect with the searchers, and his taxi fares (and personal affairs) provide additional comic complications to Tangerine's farcical drama.

Relentlessly propulsive and chockablock with entertaining tangents and brief but memorable incidental characters, Tangerine climaxes when Chester is at last cornered in Donut Time, with the various dramatis personae -- including Razmik's wife and appalled mother-in-law -- gathering for a chaotic shouting-and-shoving match, much to the dismay of the aggrieved shop owner (producer Shih-Ching Tsou). The emotional storm that's been gathering throughout the movie finally arrives with gale force, and as the hard rain scrubs away and reveals hurtful secrets, relationships risk being swept up in the flood.

Tangerine obviously explores LGBTQ issues and the ugly aspects of the sex trade, but never in a didactic fashion -- it's not teaching lessons but honestly showing lives. In a similar way, the film wonderfully reflects the diversity of contemporary America without self-consciously emphasizing its multicultural credentials. Baker and co-writer Chris Bergoch allow all their characters, even Chester, moments of empathy and surprising complexity. In particular, Alexandra and Sin-Dee -- so vividly played by non-professionals Taylor and Rodriguez -- are never defined by their racial and ethnic backgrounds or even their trans identity: They're simply human beings, and their enduring friendship transcends all differences and difficulties.