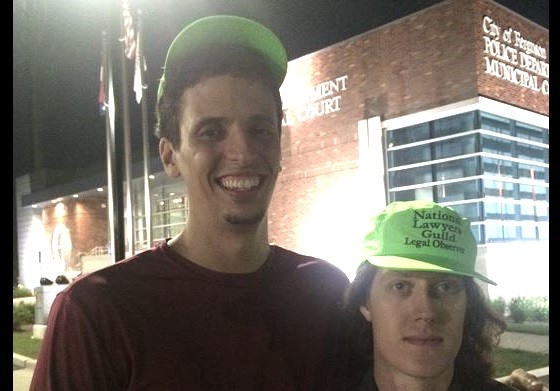 Yet another legal battle has broken out over the Ferguson-related protest that shut down I-70 last Monday.

Mustafa Abdullah, who is both a program associate with the American Civil Liberties Union (ACLU) and legal observer for the National Lawyers Guild (NLG), filed a federal lawsuit yesterday against St. Louis County. He alleges that just after the protest, county officers arrested him without probable cause, thus violating his constitutional rights. He says his ordeal lasted 18 hours.

Abdullah is a native of Egypt and co-founder of Muslims for Ferguson, an organization of American Muslims who support the police reform movement in that municipality.

In his complaint, he says he attended the protest on "Moral Monday" wearing an ACLU shirt and a green NLG hat. He was one of about ten other NLG legal observers on hand to document any police behavior that might infringe on free speech rights.

Ironically, Abdullah says his own rights were violated.

He says that after the human chain across I-70 broke up, he went down to a church parking lot where protestors had gathered. A police officer asked the crowd to disperse. Abdullah says he then walked to his car with some colleagues when a pair of county police officers approached in a patrol car, exited and rushed toward them, commanding that they get on the ground.

Abdullah claims that he asked several times why he was being arrested. After being transported to the police academy, he was told he'd be charged with interfering with a law enforcement officer.

He was finally released without charges 18 hours later.

I just got out of jail. I'm doing okay. Thanks for all the love and support.

His car had been towed, and his storage fee was $230, he says in his complaint.

Abdullah is alleging that county police violated his Fourth and Fourteenth Amendment protections against unlawful seizure.

This isn't Abdullah's first challenge to Ferguson-related police tactics: Back in September, he testfied on behalf of the ACLU against the "Five Second Rule," whereby police would only allow protests if the demonstrators kept moving.

Here's his most recent complaint: