UPDATE: Protesters Behind I-70 Shutdown Charged With Assaulting a Driver and Damaging Her Vehicle 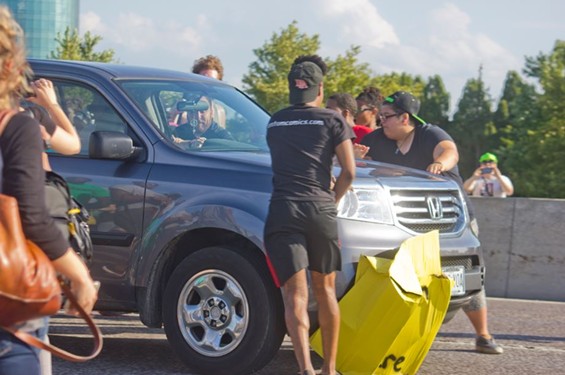 Update 5 p.m.: The St. Louis County prosecutor's office has filed charges against Alexis Templeton and Brittany Ferrell, the protesters who organized Monday's shutdown of I-70. Along with misdemeanor charges for trespassing on the interstate and peace disturbance, Ferrell is facing a felony charge for allegedly causing property damage to a woman's SUV during the protest.

Templeton was charged with misdemeanors for third-degree assault, trespassing on the interstate and peace disturbance.

"The charges stem from the efforts of the defendant to block traffic on Interstate 70. Templeton is accused of punching the victim as our victim attempted to drive past the defendant. The victim suffered an injury as a result," said St. Louis County Prosecuting Attorney Bob McCulloch in a statement released with the charges. "Ferrell kicked the victim's car as she passed causing nearly $5,000 in damage."

Monday's protest on I-70 featured some tense moments between the demonstrators and stalled motorists. One frustrated female driver nudged her SUV through the human chain and sped off without causing any apparent injuries, but criminal charges have now been filed -- against the protesters.

During an interview with KTVI-TV (Channel 2), St. Louis County Police Department spokesman Brian Schellman said the driver was hit with a "sucker punch" and her SUV sustained roughly $5,000 worth damage.

On Tuesday, police reportedly arrested the organizers of the highway shutdown, Alexis Templeton and Brittany Ferrell, but it's unclear if their arrests are connected to the alleged attack on the SUV driver. According to the St. Louis American, the two activists were taken into custody yesterday afternoon in Clayton. We reached out to Schellman last night, and while he said police have identified suspects in the alleged attack, he did not provide specifics.

Daily RFT was on the scene of Monday's highway shutdown, and we managed to snap a series of photos just as the SUV began accelerating into the protest line.

Before she gunned the engine, the woman gestured angrily at nearby protesters. She looks clearly frustrated

Our photos don't seem to show any vandalism or kicking of the vehicle, at least from this angle.

Here you can see the point where the SUV started creeping forward. Protesters began banging on the side of the car and shouting for the driver to stop.

In the next two photos, protesters can be seen placing their hands inside the driver's side window as the SUV accelerates past.

In the final photo, a person in a red shirt looks like they might be extending their arm toward the driver, but it's hard to tell what they're doing because of the man standing in the foreground.

We're waiting for more information from St. Louis County police about this incident, and we'll update the story when we hear back.

Do you have videos or photos that actually show the "sucker punch" or alleged damage to the SUV? Contact us at the email below: