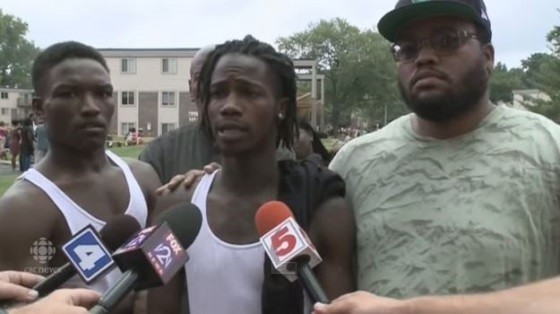 Reminiscences about Ferguson came fast and furious in the last week, the one-year anniversary of the death of Michael Brown Jr. The officer who shot Brown, Darren Wilson, was profiled in the New Yorker. Brown's mother, Lesley McSpadden, gave a long interview to Al Jazeera. And Dorian Johnson, the friend who was with Brown when he was killed, talked at length to the Riverfront Times's own Danny Wicentowski for our August 6 cover story.

See also: A Year After Michael Brown's Death, Dorian Johnson Is Still Grappling with the Fallout

Wicentowski was one of the very few journalists who's been able to sit down with Johnson in recent months, and his profile drew a fair amount of attention, including a chance to talk to NPR's Audie Cornish for a lengthy interview that aired on All Things Considered on Friday afternoon.

As Wicentowski tells Cornish, Johnson has some bitterness over how the situation played out -- and finds himself in an odd place one year after protests rocked the St. Louis area. He's a household name, and a controversial one, but outside the movement that his testimony helped to inspire.

Wicentowski says, "I think he finds himself in this very strange tension, in that he saw Michael Brown die just a few feet away from him, and he has been mythologized almost as this part of the Ferguson story, but he was also someone who was really kept outside a lot of the action. He was really on the other side of the glass so to speak. He couldn't participate in the protests, he didn't have a lot of contact with the protest activists or leaders, and he is a guy who I think really wishes could be involved and could have leant his own voice to the situation that played out in the following weeks and months."

We've embedded Wicentowski's conversation with Cornish below -- and we highly recommend giving it a listen.