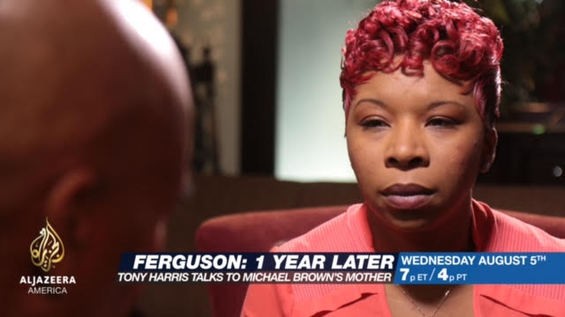 Her comments came during an interview with Al Jazeera America's Tony Harris, and it was far from the the only emotional moment. During the lengthy interview, which aired last night, she lashed out at police, prosecutors and politicians for their actions in the aftermath of her son's death.

The interview covered a lot of ground (a transcript of the full conversation runs more than 10,000 words) and her answers alternated between her heartbreak as a grieving parent to anger over a justice system that that let Wilson go free.

After reading through the interview, it's clear that McSpadden had a lot to get off things to get off her chest. Here are five:

She Never Got an Apology from Ferguson Authorities

McSpadden didn't appreciate the stilted and awkward apology video from now-retired Ferguson police chief Thomas Jackson. She also threw shade at Ferguson Mayor James Knowles III, who told the New York Times this week that his city's officers are afraid to pull over drivers because they're "going to be called a racist."

I feel like the mayor was there the entire time everything happened. I think his actions were a little too late, and I feel that if they're going to get the toxin out of there, he's part of that. I don't see him being a part of anything that consists of healing.

With the interview taking place on Monday, McSpadden hadn't yet had a chance to read the new profile of Darren Wilson published in the New Yorker that same day. In the story, Wilson blamed "pre-gang culture" for the inner city crime. He also said he didn't think Brown had "the best upbringing."

All I can say is vengeance is God, and I hope he has mercy on his soul, really; but he can't hurt me with his words. What he did last year hurt me really bad, so his words mean nothing to me.

He wouldn't even admit what he did was wrong. He wouldn't admit he had no reason to do what he did. He's cold and malicious. I'll never forgive him.

It's not the right thing to say, but it's the truth, and everything that's legal isn't right.

In the wake of Brown's death, numerous local and national organizations flocked to the area. McSpadden said that these groups didn't always follow through on their word

And these organizations that come about, but you just show up around times like this...and we haven't heard from you to know that you support us or stand with us, towards the justice that we seek for Michael Brown.

And I have seen a lot of that, and the promises for counseling, something that me and my children need badly, never come through; but when you feel that you could get this type of attention at such a time, it's appalling to me.

She Says the Violence in Ferguson Was a "Cry for Help"

McSpadden said she wasn't surprised that the confusion and pain surrounding her son's death led to chaos in the streets.

My response, as of now, as today, I can see that happening. I see the hurt, I saw the frustration, I saw the years and years of build-up of the prosecutor not doing his job, of cops coming from hours away, where they live, to police a community that they have no understanding. We saw all — it was a cry for help.

The looting, everything they thought was just out of the ordinary. It was a cry for help. It was like we had a tsunami or a Hurricane Katrina, but it was killings after killings.

This killing, in the broad daylight, middle of the day, with people out walking their dogs and jogging and playing, and this erupts, and we don't have any understanding to why it happened. No facts. Yeah, that was bound to happen.

She Doesn't Believe Her Son Died in Vain

Despite the anguish and mourning, McSpadden told Al Jazeera's Harris that she sees a greater meaning in her son's death.

My son's life and death has a bigger purpose on it. He was too good for this wicked world, so God picked the rose too soon.

Do I like that? Do I love that? Of course not, but it has given me a voice for him, to let people know that we are dealing with some social injustice. It's not fair, it's not right. And we are Americans, just like everybody else that is an American, and we do everything the same way. So why are we treated so differently? Why do we have to march and protest and lead to looting and fires and everything that has — you have seen erupted, why do we have to do all that to be seen or be heard?