A Rosy Picture of Bipolar Disorder in Infinitely Polar Bear 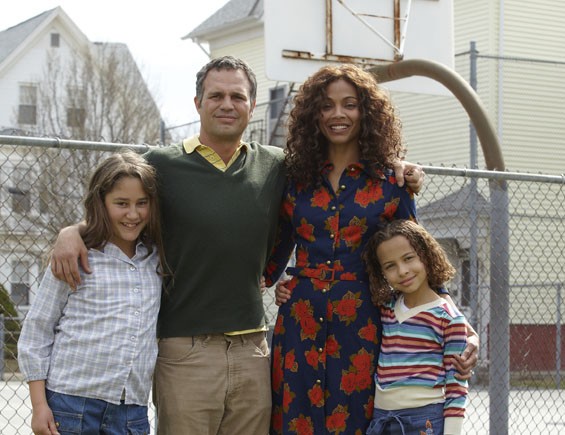 Because the film is strongly based on writer-director Maya Forbes' own family's experience, criticizing it for romanticizing aspects of her father's bipolar disorder seems churlish. We can't honestly judge the accuracy of the film's portrayal -- it's Forbes' life, not ours -- and given society's fearful ignorance of most mental-health conditions, a work that offers an informed, sympathetic perspective deserves some slack-cutting.

Those dutiful qualifiers offered, I still found Cam Stewart (Mark Ruffalo) a bit too adorably eccentric, with the film veering dangerously close to the holy-fool territory of '60s cult fave King of Hearts by soft-pedaling the difficulties and playing up the compensatory joys of his manic personality. And except for a glimpse of his zombified state during a hospitalization at the film's outset, Cam's depressive episodes receive oddly scant attention: He's always up, never down. 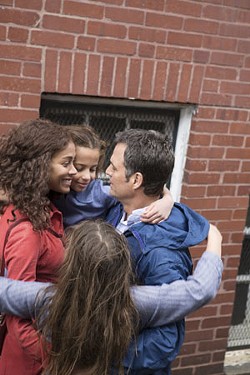 Which is not to say that Infinitely Polar Bear fails to acknowledge the debilitating real-world consequences of Cam's illness. Bounced from both Exeter and Harvard, unable to hold a job, prone to argumentative outbursts and strange behaviors, Cam certainly suffers, and he enormously complicates life for his family: estranged but saintly wife Maggie (Zoe Saldana), and daughters Amelia (Imogene Wolodarsky) and Faith (Ashley Aufderheide).

Although Cam comes from wealth -- thus the quality of the schools from which he's been expelled -- his miserly grandmother controls the trust, doling out support in the tiniest imaginable increments. Maggie's modest salary primarily supports the family, and she and the girls live barely above the poverty line in a rent-controlled apartment in Cambridge, while Cam dwells in a post-institutionalization halfway house and vainly petitions for a reconstitution of the family unit. Recognizing this dire situation as unsustainable, Maggie decides to better her employment prospects by obtaining a graduate business degree from Columbia University, but that necessitates an eighteen-month stay in New York City. Cam, despite his precarious mental state, must take on the daunting responsibility of serving as his daughters' caretaker. Misadventures ensue.

Infinitely Polar Bear -- the title refers to Faith's malapropic version of the word "bipolar" -- elicits laughs and tears in roughly equal measure, but it doesn't push hard in either direction. Rather, it unfolds with a winningly naturalistic ease and resists self-consciously big moments designed to manipulate our emotions or drive plot.

But the central characters, although endearing, lean in the direction of type and lack nuance. Again, Ruffalo's Cam remains ingratiatingly likable even when behaving in wholly inappropriate ways, and the girls are cut from the same outlandishly cute cloth as the daughters in Judd Apatow's films or Louis C.K.'s TV show: bratty on occasion but precocious and irresistibly sweet. As the tolerant, rock-like spouse, Saldana charms, but she's required to serve as the film's straight man -- stoic to Ruffalo's zany.

Because it's set in 1978, the film also seems a bit disingenuous in not exploring the tensions the biracial couple would have likely encountered in Boston -- which was then embroiled in a divisive busing controversy -- but it does smartly address the era's sexism in a subtle job-interview scene after Maggie's graduation.

Like its bipolar subject, Infinitely Polar Bear never quite achieves equilibrium, but the film's many highs more than compensate for any lows.