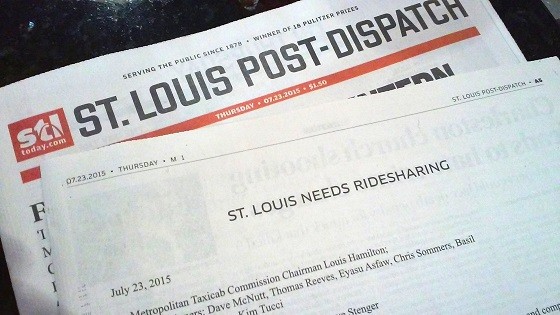 With just a week to go before the next meeting of the Metropolitan Taxicab Commission (MTC), UberX -- the online ride-hailing service -- has ramped up its PR campaign to break into the local market with a full-page spread in the Post-Dispatch.

The ad boasts the support of nearly 200 business leaders and professionals (and if you want to see the full list, click here).

Implicitly, by the way, this ad highlights something odd about the pro-Uber coalition.

The fight between the MTC and Uber is really a fight about regulation. The MTC wants to regulate Uber in a certain way; Uber doesn't like it.

So it's not surprising to see that big-wig executives such as Maxine Clark of Build-a-Bear, or free-market crusaders such as Rex Sinquefield, or former Republican gubernatorial candidate Dave Spence, are all on the list.

What is counterintuitive is that some of the loudest Uber cheerleaders are millenial, urban-renewalist progressives. They'd not stand with Sinquefield on a lot of issues, but they do on Uber. Why? Probably because most of them grew up on the internet, and now heavily interface with the world through their smartphones. They're addicted to cyber-convenience.

Which is not necessarily a bad thing. It's just interesting that many folks who wouldn't hesitate to call for more regulation of banking, or health care, or exploitation of natural resources will bemoan the heavy hand of the state when they look at the MTC -- an entity that, love it or hate, was designed by Missouri legislators to protect consumers. Maybe their stance is just a testament to widespread disatisfaction with our city's taxi industry (or more broadly, with our city's public transportation options).

Uber spokesman Brooke Anderson told RFT in an email: "We support smart, modern regulations that allow our business model to work. What we don't support is an anti-technology, onerous approach to regulation that would prevent us from entering a market in order to help a special interest stifle competition."

Riverfront Times has recently spoken to insiders from both camps, and one thing is clear: There's no guarantee whatsoever a deal will be hammered out before July 29. Which could make the next MTC meeting a rather lively gathering.

We welcome tips and feedback. Contact me at nickp@riverfronttimes.com