Shower to the People: New Nonprofit Takes Hygiene to the Homeless -- By Truck 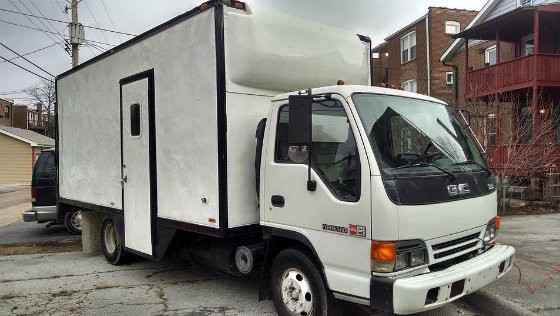 Maybe you've given a homeless person spare change. Or even a sandwich.

But what about a shower?

"We can give people food all they want, but if they don't have proper hygiene then they won't get a job," explains Jon Hiltz. "People get in a rut of feeling worthless and if they feel dirty, then they don't even want to be around people and do something for themselves."

That's the animating philosophy behind Shower to the People, a nonprofit launched by Hiltz and his co-founder Jake Austin. Their aim is to provide showers and other basic hygiene necessities to St. Louis' homeless population through a portable shower truck.

Hiltz and Austin have been working with the homeless in several different capacities, such as volunteering at food pantries and working with The Urban Mission (another non-profit). After they saw the need for basic hygiene, they swung into action.

"We don't think people are on the streets because they're lazy," says Hiltz. "Many times, they fall into addiction, various life circumstances. There are many veterans on the street. I myself am a veteran and suffering from PTSD, so I work with those kind of people as well."

The duo started a GoFundMe account to raise $5,000 to purchase the truck needed for the moving operation. After meeting their goal and purchasing the truck, they got some help from Apache Village, an RV dealership in Hazelwood. After hearing what the truck would be used for, Apache Village donated all of the labor needed to convert the truck into a "Shower to the People" truck.

Hiltz explains that the truck is in the final stages of completion. All that's left is the generator installation. They expect the truck to be up and running by August 1.

"The truck is going to move around, all we need is a fire hydrant. As long as we have diesel fuel in the truck, the generator will allow us to make hot water," explains Hiltz.

Several churches and other organizations continue to donate soap and other cleaning supplies. Mrs. B's handmade soap out of Cedar Hill, MO donates approximately 300 bars every month to Shower to the People.

Hiltz plans to park the truck in front of homeless shelters and other locations in and around downtown. He hopes to have the truck out everyday, whether it's run by him or other volunteers, so that they can service the 1,300 homeless people living in or around St. Louis.

Although showers are the first priority for the shower truck, Hiltz plans to soon have a barber, medical personnel and laundry services on board as well.

To learn more about Shower to the People and their other projects visit their website.

We welcome tips and feedback. Contact the writer via email at emily.mccarter@riverfronttimes.com