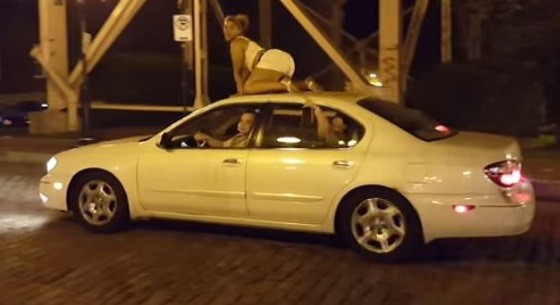 Check out this video shot at Laclede's Landing and uploaded to YouTube on Wednesday. It's great for a couple reasons.

First, the girl provides her own soundtrack. The lyrics are "Woot," and she synchronizes these lyrics with her twerking activities.

Second, there is almost no one on the street to watch her. (Here's where she was on a map; the Twerking Footprint stretches from north to south along North 1st Street.) So maybe this wasn't about exhibitionism. Maybe she just did it because it felt good! #YOLO.

(Although it's unclear how she felt at the end of the clip, when the car hit the brakes and she appeared to slide head-first onto the hood. Hopefully she didn't hurt herself.)