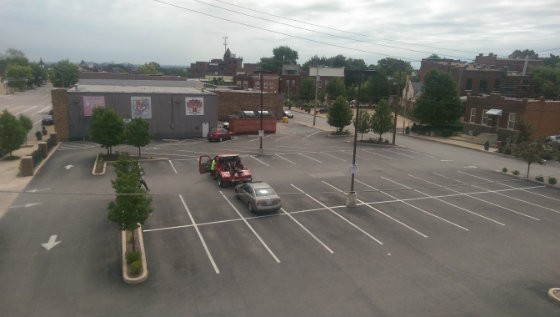 It was the interns' cars that sent Chris Benson over the edge.

Two new interns had just started working out of the office of Benson's Lamplight Films, a film production company based in south St. Louis, when their cars were towed. They'd parked in the lot next to Lamplight's office on Gravois, just east of Jefferson -- and missed the signs on the office door, warning them they could only park in particular spots.

Never mind that the lot was practically empty. It would cost $150 to get each car out of hock -- money that Benson personally paid.

"They're not making any money," he says. "They didn't know."

It left a sour taste in the filmmaker's mouth. Today, he's boycotting the next-door neighbor that arranged for the towing -- Hodak's Restaurant & Bar.

And he says he's not alone.

"We used to go there all the time," he says. "We used to send our guests there." Not any more: "Everyone in this building is now boycotting them. It's ridiculous." 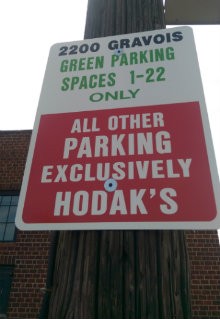 At issue is a 110-space parking lot that sits between Hodak's and The Polar Wave Ice & Fuel Building, an old ice manufacturing plant that Doug Firley and his partner bought back in 2006. Firley's company has since attracted a host of tenants, including Lamplight Films, Alive Magazine, the restaurant Spare No Rib, Bumbershoot Aerial Arts and Firley's own Shock City Studios.

Firley and his partner actually paid for the lot's construction. They knew they needed off-street parking to get the city to sign off on their building rehab, so they talked Hodak's into an easement. Their agreement was formal: the Polar Wave building would pay for the entire lot to be constructed, but get use of only 22 spaces within it. The rest would go to Hodak's in exchange for the restaurant signing off on the easement.

The lot wasn't cheap -- it cost $350,000 to construct, Firley says. And while he would have loved more than 22 spaces, Hodak's owner Charlene Hegel proved a tough negotiator. "She was playing a zero sum game," Firley says.

Unfortunately for Firley, the deal has come back to haunt him and his tenants. In recent months, angry words have been exchanged, attorneys have gotten involved, and tow trucks have become a common sight at the south city parking lot.

The situation has gotten so bad that, Firley says, Hegel showed up at Bumbershoot Aerial and made a scene in front of its students. "I had to tell her, 'If you set foot in my building again, I'll have you arrested for trespassing,'" he says.

Meanwhile, Firley and Benson say, Hodak's portion of the lot sits empty during most daylight hours.

"These people have infuriated me," Firley says. "You just can't negotiate with crazy."

Hegel did not want to speak to Riverfront Times, but authorized longtime employee Rick Kuehn to do so on her behalf.

Kuehn agrees the situation has gotten out of control. But he says he finds it hard to believe Hegel would have cursed at any aerial students. "That's not her style," he says. He blames Firley for the incident, saying that a bus visiting the trapeze studio had parked in a way that took up multiple spots -- all of them legally belonging to Hodak's. Hegel called Firley and asked that the bus be moved.

"I don't think [Firley] was very polite in his response," Kuehn says. "That's what started it all."

More importantly, he stresses the letter of the law -- the "ironclad agreement" between Polar Wave and Hodak's indisputably gives Hodak's the right to all but 22 spaces on site.

That's an agreement that Polar Wave tenants just didn't seem to take seriously until very recently, Kuehn says. And while he knows Firley would love to pay for more spaces, Hodak's can't accommodate that request.

Kuehn admits that Hegel can be difficult. "She's a very strong-willed person, but she's also really good people. And she's got right on her side."

Firley is convinced that Hegel is acting out of spite. He insists that Hodak's doesn't come close to needing the full extent of the lot until the evening -- and by then, his tenants have cleared out.

Yet the towing continues.

"She's really choking these businesses," he says. "I think she's choking the oxygen out of the building hoping they can pick it up at foreclosure auction."

He's since asked all his tenants to start parking on the street, thereby freeing up Polar Wave's allotted 22 spots for visitors. But he worries what will happen in the wintertime, when snow renders some spaces unusable -- and the streets become impossible to park upon.

He also worries about what the war with Hodak's is doing to his soul.

"Now I have to defend every one of my spaces," he says. "Now we have this rage war going on. Do I have start towing their cars? That's not what I want to do."

He adds, "These people have infuriated me. I'm never eating there again. And I'm telling everyone I know."