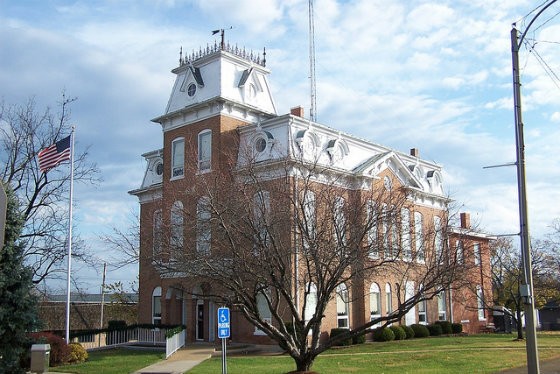 Dent County, Missouri has retreated from plans to lower its flags to mourn the "abomination" of the U.S. Supreme Court decision legalizing gay marriage, the Salem News Online reports.

But it's not because the county commission, which backed the plan unanimously as recently as yesterday, has changed its mind about same-sex marriage or anything.

Oh, no. The reversal is "out of respect for veterans and those currently serving in the military," the newspaper reports.

The commission had voted only yesterday to lower the flags -- and had planned on doing so at two county buildings once a month for 12 months. The flags would be lowered on the 26th day of each month, a reference to the Supreme Court's June 26 decision.

Commissioner Darrell Skiles, who'd introduced the original measure to lower the flag, told the Salem News Online the commission would meet today or tomorrow to rescind the order.

For which we at Riverfront Times are truly grateful. The flag lowering surely would have drawn a firestorm had the commission gone through with it. And we must admit, we didn't quite feel like driving to the "Feeder Pig and Calf Capitol of Missouri" to watch the inevitable protests unfold.

Blame the military if you'd like, Darrell: We're just happy we won't need to plan a visit.

A former student at Salem High School, which is located in the county seat of Dent County, has put up a crowdfunding page to use the area's sudden notoriety for good. If you feel like donating to the "Courage to Be LGBT" scholarship earmarked for local students, check out this link.