Watch Out, St. Louis -- Bubble Soccer Is Coming to Town 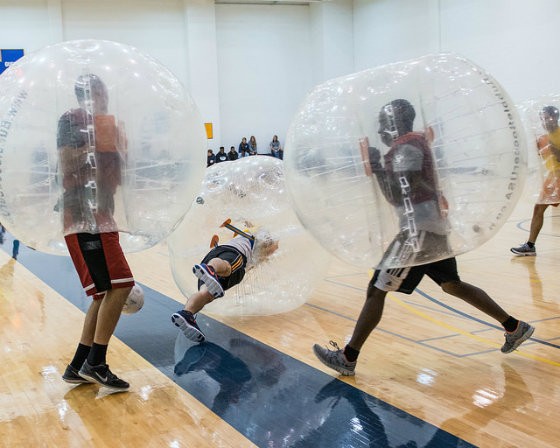 Joel Lutfiyya first saw bubble soccer on The Tonight Show Starring Jimmy Fallon, and immediately had one thought: It would be a great fit for soccer-loving St. Louis.

"I decided to take a look at it, it looked like a great business opportunity," he explains. "From research, I found out that no one was doing it in the area."

The bubble version of soccer is much like the real one -- except it's also sort of like bumper cars. Instead of cars, players use their own bodies for bumping. And those bodies just happen to be clad in big plastic bubbles ... sort of like those inflatable sumo wrestling suits. Your arms stay inside the bubble, so you're at the mercy of the other players whacking into you, and dependent on your legs poking out the bottom.

"If you mix traditional soccer principles with NFL football rules, then you get bubble soccer," Lutfiyya says.

The sport originally sprang to popularity in Europe and has since spread to North America. The National Association of Bubble Soccer counts 35 leagues, with more on the way, in the U.S. and Canada.

After experiencing bubble soccer for himself in Chicago, Lutfiyya, who works for a marketing and advertising agency in St. Louis, plunged into action. He contacted manufacturing companies in China, confirmed the most suitable material with an engineer friend, and founded his own bubble soccer rental company called Ball Busters Bubble Soccer.

"St. Louis is a sports town; for a lot of people that's what they live for," he says. "Cardinals, Blues, Rams, and the new soccer team. Bubble Soccer is another sport that St. Louis will latch onto and embrace."

The rules are similar to traditional soccer; the objective is to get the ball into the opposing teams' net. It is full contact, but hitting someone from behind or from the side is discouraged. There are obviously no throw-ins since your arms are tucked inside the bubble with the rest of your upper body.

In fact, the players' armlessness has led to one complication for Lutfiyya: Hiring referees. "They must be athletic because this is a fast-paced game," he says. "They also need to help the players get up because you can't use your arms." The good news is that they don't need to know Bubble Soccer; as long as they know the rules of soccer itself, they should be just fine.

In the mean time, Lutfiyya is teaming up with 101 ESPN Radio to host a charity event to raise money for Crawl for Cancer's upcoming pub crawl in October.

The free event will take place July 21st at Matteson Square Garden in St. Peters from 7 to 10 p.m. All donations will go towards Hope for Young Adults with Cancer.

We welcome tips and feedback. Contact the writer at emily.mccarter@riverfronttimes.com.