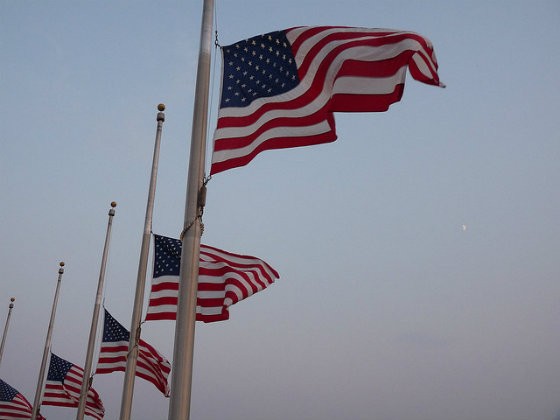 UPDATE: The county commission has already backed away from its plans to lower the flag. See our latest post for the most recent information.

The County Commission of Dent County, Missouri, voted unanimously today to lower flags on two county buildings to protest the U.S. Supreme Court's June 26 decision legalizing gay marriage -- or, as the county's presiding commissioner puts it, "the U.S. high court's stamp of approval of what God speaks of as an abomination."

Those flags, on the Dent County Courthouse and Judicial Building, will be lowered below half-mast on the 26th of each month until June 2016, so that "all who see these flags at this lowered position be reminded of this despicable Supreme Court travesty," per a letter written by Presiding Commissioner Darrell Skiles and first reported in the Salem News Online.

The vote was confirmed to Riverfront Times by the Dent County Clerk.

Dent County is roughly a two-hour drive southwest of St. Louis, just past Rolla. With a population of approximately 15,000, the county is the self-described "Feeder Pig and Calf Capitol of Missouri."

The trio who voted for the year of mourning -- commissioners Skiles, Dennis Purcell and Gary Larson -- are all Republicans.

Skiles does not have a listed phone number, and no one answered the phone at the County Commission office on Monday afternoon. We'll update this post if we're able to reach any of the commissioners.