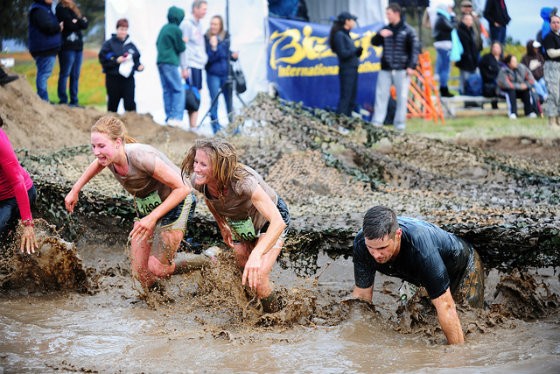 So here's how crappy St. Louis weather has been lately: Organizers had to cancel the St. Louis MuckFest because it's too damn mucky.

That's not a joke.

MuckFest MS is a fundraiser for multiple sclerosis that involves intrepid souls racing for 3.1 miles over "mountains of mud and outrageous obstacles that spin, swing, and fling them up, down, and sideways," in the words of its organizers.

The St. Louis iteration had been scheduled for this weekend in Pevely. But organizers have now postponed it until August, citing the "continuing high water levels of the Mississippi."

Last month was the rainiest June on record for the St. Louis area -- and the second rainiest month, ever, since records started being kept in 1874. Only August 1946 brought more rain.

And though this weekend is expected to include a rare sunny set of days, precipitation has continued to fall steadily in the first week of July. The last three days all featured varying amounts of rainfall.

Here's what MuckFest's PR team told us about the cancellation:

We take seriously our obligation to provide our participants, volunteers, and spectators with the safest and most enjoyable event experience possible. Flooding and strong rains have prevented us from accessing the site of the 2015 MuckFest MS St Louis and preparing the course. With the forecast for more rain and potential flooding, we felt it was best to postpone this year's event ... All of our registered participants have been contacted about the postponement by email.

Incidentally, this isn't the first time that too much muck has doomed MuckFest. In May 2013, flooding of the Mississippi River also led to the event's postponement.

This year's MuckFest has been rescheduled for August 15. Think the rain might stop by then?