Without Their Mystery, the Minions Aren't as Interesting 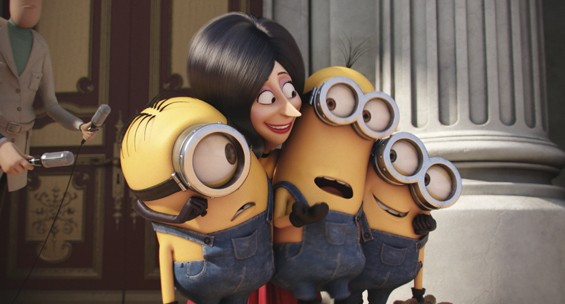 Or, at least, the movie they've now gotten is not the movie they deserve. Turns out, the Minions are better off without a back-story. Their mystery was part of their charm. Their minion-ness is essential to their humor. And none of that is present here.

Oh, this is fine for little kids. Minions is mostly devoid of the crap that drives me crazy about movies that are aimed at little kids, like fart jokes and crotch injuries. The little kids will laugh at the slapstick antics of the small yellow blobs and have a fine time, probably. But I am not a little kid, and I do not write for little kids. 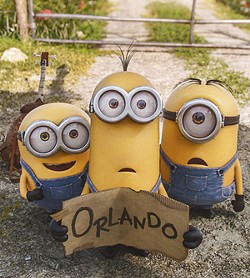 Minions opens with a grand history of the race, starting with their evolution from tiny one-yellow-celled creatures floating in the primordial seas through the form we see them in now. So now we are forced to consider how the Minions evolved when they are all apparently male. At least, they all seem to have male names; the narrator of the history lesson (Geoffrey Rush) rattles off a long list of Minion names -- all male -- for some reason that makes no sense at all unless it's to reassure us that, yes, all Minions are male. And yet they also experience sexual attraction: We witness one Minion hitting on a yellow fire hydrant. So the Minions must all be gay. Not that there's anything wrong with that (or with being hydrant-oriented), but that tends to hinder reproduction without technological assistance.

It's not like I want to think about this stuff, but the movie forced me to.

And then there is the Minions' cultural history, as a race driven to find the biggest, baddest villains to serve and worship until accidentally killing them with their bumbling overenthusiasm. First it was T. rex, then it was the Egyptian pharaohs and so on, right on up until Napoleon...at which point the Minions became depressed as a culture and retreated to the Arctic (or the Antarctic; it's not clear). And it's not like I want to think about this either, but the movie forced me to: What, no Hitler for the Minions to worship and serve and kill? No Stalin? No Pol Pot? They could have done us all a huge favor and not gone into retirement.

I know, I know: This is a kids' movie, you can't bring Hitler into it! I'm not saying the writers should have, and I get why the movie just skips right over the war-torn nineteenth and twentieth centuries. I am saying that getting this specific about the Minions' back-story makes it uncomfortably weird for those of us over the age of six.

When the Minions emerge from their depression and decide to go in search of a new Big Boss, it is 1968 and apparently Richard Nixon isn't good enough for them. So Minion scouts Kevin, Bob and Stuart (all voiced by director Pierre Coffin) settled on the world's first female super villain, Scarlet Overkill (the voice of Sandra Bullock), who is a pretty standard cartoon villain who doesn't commit genocide or hang out with Henry Kissinger at all. She evil-plans to take over the British monarchy, which might be villainous though it's hardly a route to power, but it does allow lots of 1960s-era poking fun at the British. Coffin is French, so basically you're watching a lot of ethnic-humor payback happening here. Some of it is even mildly amusing; it's not exactly the height of cruelty to suggest that the Brits drink a lot of tea.

Minions on the whole is mildly cute, but the Minions kinda don't work as the heroes, which is the role they end up in. It demands that they behave in an un-Minion-like manner that is entirely contrary to why we fell in love with them in the first place. Can't we just let Minions be minions? And not know so much about them? Please?