Bummed About the City Razing Old Buildings? Now You Can Track It Online 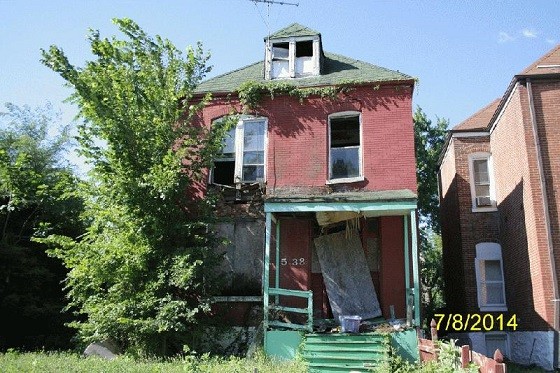 Until recently, it wasn't easy to know how many old buildings in the city were slated for the wrecking ball, much less what kind of shape they were in.

Now there's a one-stop shop for it: The "Demolition Docket."

Since April, the independent Preservation Research Office (PRO) has been running the new blog, utilizing government data that's always been available, only not in such a user-friendly format.

The private project actually germinated at City Hall in the office of Board of Aldermen president Lewis Reed, according to his legislative director, Michael Powers.

Reed concluded that citizens ought to have just as much online access to demolition permits as they did to construction permits, Powers says. So Powers set up a spreadsheet of that info and posted it on Reed's website. It drew attention to the demolition of Castle Ballroom, among other things.

Then last year, the PRO agreed to overhaul the project pro bono by creating the new blog.

PRO founder Michael Allen says not every case will "confirm the preservationist viewpoint" because some buildings are in bad shape. Many cases, however, will.

And the best features of the website are yet to come: Within the next week, he plans to add maps that reveal not only where demolition has been approved, but also construction. Certain maps will have a time-lapse function so you can see, in detail, how the face of the city is changing.

Allen says the blog has not elicited much reaction from city officials. However, Pi Pizza founder Chris Sommers did recently weigh in:

St. Louis Demolition Docket - Well if this isn't a most depressing website. http://t.co/umB9hi6VNE

You can check out the Demolition Docket by clicking here.