Why Are Billboards of Muhammad Popping Up Around St. Louis? 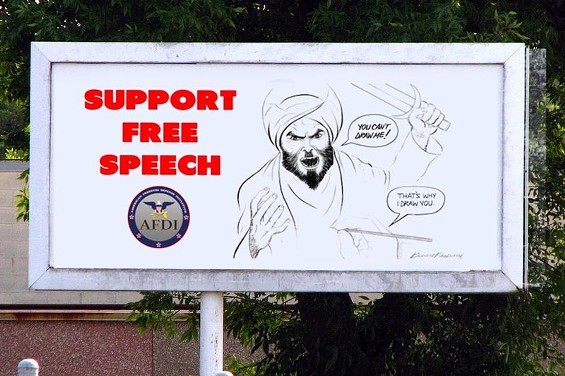 Car dealerships, diners, casinos and lawyers -- those are the things typically shown on billboards in St. Louis. Lots of lawyers. Maybe a few concerts.

Last week, however, Pamela Geller's American Freedom Defense Initiative, or AFDI, announced that it had erected billboards in St. Louis bearing an illustration of Muhammad waving a sword and snarling "You can't draw me!"

Ostensibly, the billboards are intended as a rallying cry for free speech against the encroachment of Sharia, which is the legal code of Islam, as well as the spineless liberal media that ... actually, we'll just let Geller explain it:

"The American media and advertising worlds have submitted to the Sharia restrictions on speech," Geller writes in an email to Daily RFT. "The tremendous cowardice of American media in submitting to the wishes of devout savages and not showing Muhammad cartoons only encourages those waging violent jihad to impose their religious orthodoxy."

Depending on who you ask (or which cable news channel you watch), Geller is either a human rights activist opposing violent Islamic extremism, or the embodiment of Islamophobic racism in America. In 2010, she was among the organizers who protested the construction of the so-called Ground Zero Mosque, and AFDI has since sponsored controversial anti-Islam ads on metropolitan transit lines, reading: "In any war between the civilized man and the savage, support the civilized man."

More recently, Geller organized and sponsored a $10,000 contest for the best drawing of Muhammad. Portraying Muhammad is widely considered offensive to Muslims

That contest, held in Garland, Texas last month, was targeted by two gunmen who shot at police officers working a security detail. The shooters, both Muslim men, were killed by police. The self-declared Islamic State, or ISIS, later took credit for the attack.

Last week, police alleged that Geller had been targeted for beheading by three other men associated with ISIS.

So, what are these billboards doing in St. Louis? That's a bit trickier to answer.

Geller says she chose St. Louis because someone here "offered" her billboard spaces, but she did not respond to our followup questions regarding the campaign's cost or the identity of this benevolent -- and in Geller's eyes, courageous -- billboard owner. (Update: See bottom of page for additional info on the billboard owner.) She also could not provide details on the specific whereabouts of the billboards, though the AFDI website claims the campaign is featured in 100 St. Louis locations.

"St. Louis is a great American city, a gateway to the west. It's a perfect starting point in a national campaign in the defense of freedom," Geller writes.

Oddly, we haven't personally spotted any of these billboards yet, and we've noted only three Muhammad billboard sightings -- two were identified by the St. Louis Post-Dispatch, and another was spotted by Redditor elduderino197.

In a statement to the Post-Dispatch, the Interfaith Partnership of St. Louis said the billboards violate a "fundamental principle of all of our faith traditions -- that we are called to treat others as we wish to be treated."

In a followup email, we asked Geller to respond to the criticism.

"Did they issue such a declaration when Islamic jihadists murdered the Charlie Hebdo cartoonists in Paris in January?" she wrote back. "I am actually treating others the way I would like to be treated: I am responding to being insulted and offended by those murders not with my own threats and murder, but by upholding the core element of a free and genuinely pluralistic society ... What they're essentially saying is that in the face of violent intimidation, we should give the violent person what he wants. That will only lead to more violent intimidation. For my part, I will not encourage thuggery."

We got it, Geller. You don't want to encourage thuggery, and you're totally following the golden rule of ... being an preemptive asshole, maybe? Is that it? Do we not love freedom enough to get this?

(Oh, and for the record: The Interfaith Partnership of St. Louis did condemn the January killings in Paris. ¯\_(ツ)_/¯.)

Update 11:45 a.m.: A helpful commenter tipped us to this article describing how Muhammad billboards started showing up last week in Marion County, Arkansas, which shares a border with the Missouri state line. According to the Baxter Bulletin, the billboards came courtesy of Daniel Fuller, president/CEO of St. Louis-based Adunity Media.

Fuller told the newspaper that he considers the billboards "a public service" for St. Louis, although he did say that Geller paid for them.

Have you seen any of these billboards around? Let us know the locations via email or comments.