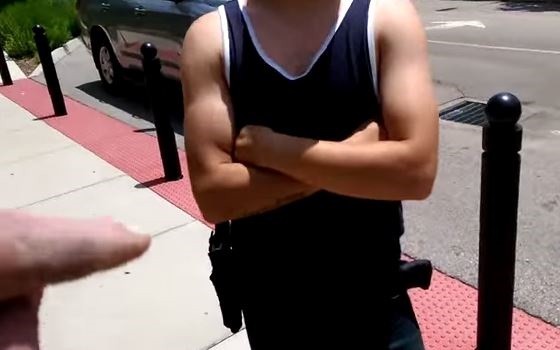 Gun-rights advocate Jeffry Smith of Ohio did not, in the end, make good on his plan to walk through the St. Louis Zoo on Saturday with a .45 caliber handgun to challenge its firearms ban.

But Smith and some like-minded allies did show up at the zoo, and ideological sparks did fly -- out on the sidewalk! We know this because a man named Rich Johnson confronted them, recorded the encounter and posted it to YouTube.

The video is long and not easy to watch because Johnson appears to be physically shaking at first -- thanks to "a lot of coffee," he says in the clip.

But it's a tense exchange. It starts with Johnson calling one of the advocates a "pussy" and asking: "What are you gonna do with the gun, man?"

Advocate: "Be an American!"

Johnson: "You wanna shoot somebody?"

Advoate: "I don't. But if someone wants to threaten my life, then I will take their life."

Johnson tells the advocate to stop living "in the Rambo fantasy world."

The pair then has the following exchange:

Advocate: "You don't get to tell me that I can't carry my guns."

Johnson: "No, but I'm goin' to be up your ass every time y'all go somewhere."

See the whole thing below: