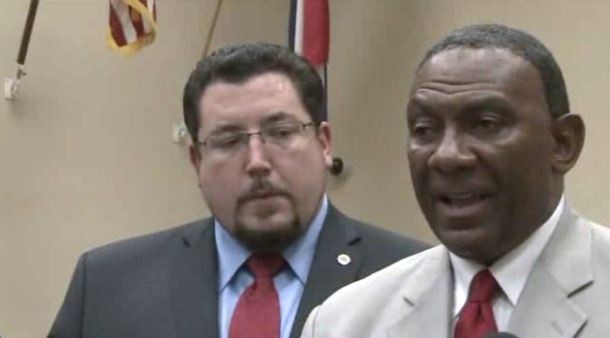 Ferguson Mayor James Knowles III might insist his new interim city manager Ed Beasley is "an excellent choice for the city" -- but Knowles might as well be trying to hide a grizzly bear under a napkin.

On Tuesday, just hours before the city announced the hiring, the St. Louis Post-Dispatch reported on the trail of scandals leading from Beasley to his former employer, the financially beleaguered city of Glendale, Arizona, where he worked as city manager from 2002 to 2012.

The crux of the Post-Dispatch report was a 2013 audit commissioned by Glendale's city council, which accused Beasley and other administrators of shifting millions of dollars among several accounts to cover a retirement program's losses. Beasley, the audit alleged, intentionally concealed the financial shenanigans from the Glendale city council.

"I know the audit is on some folks' minds," Beasley said during a Tuesday press conference with mayor Knowles and the Ferguson city council. "That occurred after I had left the city. I have worked for 27 years in the profession, 17 years for the city, never had a bad review."

"Lord have mercy, I can't believe they hired him," Maupin says. "He wrecked this city."

While Maupin faults Beasley for lying about the audit's conclusions, he saves the brunt of his ire for Beasley's role in developing three major sports facilities in Glendale: University of Phoenix Stadium, which hosted last year's Superbowl; Jobing.com Arena, home to the Arizona Coyotes; and Camelback Ranch, the spring training site for the Chicago White Sox and Los Angeles Dodgers.

"He began these terrible sports partnerships with the city, which has almost totally bankrupted them," Maupin says.

Indeed, in 2013 the city was being mentioned in the same sentence as Detroit, and bankruptcy loomed as city leaders grappled with a $26 million negative fund balance. That's despite Glendale having been a relatively affluent suburb with land prime for development as nearby Phoenix sprawled ever outward. North St. Louis County, this area was not.

So how did the city end up teetering on the brink of ruin? Those giant sports deals, which had looked so promising before the 2008 recession, turned disastrous as the country's economy contracted.

Here's how the Associated Press described Glendale's financial unraveling earlier this year, in a stinging report published shortly before the city hosted the Super Bowl:

Glendale bet big on professional sports in the last 15 years, spending millions of dollars on a hockey arena for the Arizona Coyotes and investing heavily in a spring training ballpark for the Chicago White Sox and Los Angeles Dodgers. Then the economy tanked, and the hockey team went through bankruptcy, with several different owners in recent years. It got so bad for Glendale that leaders were talking about bankruptcy at one point as its credit rating faltered.

The city has found stronger financial footing since then and its bond rating has improved markedly, but not without having to raise taxes, trim 25 percent of the municipal workforce, cut back on paving projects, and reduce hours at municipal swimming pools and libraries. The 9.2 percent sales tax that shoppers and diners pay in Glendale is among the highest in the state.

Sounds bad, right? It gets worse (and more complicated) the further back you dig.

In 2009, during the depth of the recession, Beasley attempted to engineer the sale of a reeling Coyotes franchise. The team had declared bankruptcy that year and seemed poised move to Canada. For Beasley, however, keeping the team in Glendale apparently translated to selling the team to his friends while concealing plans from other interested parties.

"It's one thing to fight to save a team. It's another thing entirely to fix the playing field for connected insiders," wrote Phoenix New Times columnist (and current RFT editor-in-chief) Sarah Fenske in 2009 column that dug deep into Beasley's behind-the-scenes machinations. Although the sale never materialized, reading the complex yarn should make even Rams fans yearn for the simplicity of St. Louis' money-hemorrhaging attempts to keep the NFL in town.

To get another perspective on Beasley, Daily RFT reached to Elaine Scruggs. Scruggs served as Glendale's mayor from 1993 to 2013 and has been blamed (along with Beasley) for sending the city into its current financial tailspin.

"As a former elected official, I know what it's like to have people second-guessing," she says, adding that she has "no right or place" to weigh in on Beasley's ethical qualifications or whether he's a good fit for Ferguson.

"The best thing that Ferguson [residents] can do, if they have doubts or apprehensions, is they should talk to their council members, their mayor, who voted to make this decision and ask them -- not someone that is 2,000 miles away. They need to talk to the people who made the decision."

The aftermath of Beasley's once-respected ten-year career in Glendale left him with few people willing to defend him publicly, and he hasn't worked in government since his 2012 retirement. His move to Ferguson should prove a far different challenge than his previous gig: Glendale boasts a population of 230,000, while Ferguson has 21,000 residents. Glendale's future depends on how it deals with its debt-riddled sports infrastructure, while Ferguson's future is mired in the aftermath of a damning Department of Justice investigation and mounting lawsuits.

Still, there may be cause for measured optimism. Norma Alvarez, a Glendale city council member who served from 2011 to 2014, watched Beasley's career crumble beneath the city's debt crisis and the scathing audit.

"Everybody knows in Glendale that we had a corrupted council," she says. "He let them know what they were doing wrong, but he went along with it because that was his job. I'm not saying that's a good thing. I would have protested it, but he didn't."

As for the audit and shady retirement account, Alvarez paints Beasley as a scapegoat for a city council desperate to cover its collective ass.

"The whole business was approved. He couldn't do anything that wasn't approved by the council. I was there when he was being investigated, and there was a lot of people making money. It wasn't that he lied to the council -- the council was corrupted, and thank God they're gone."

But it's reasonable to assume that Mayor Knowles and the city council are seeking a long-term solution for the city manager position, and that they hope Beasley -- an African-American with more than two decades of city management experience -- can do for Ferguson what he could not for Glendale.

"I don't know what he's going to do to, but I think he's a hard worker and he's a smart person," Alvarez continues. "But if he's working with corruption -- he did it before. If you have a corrupted council there, he would follow. He does the job."