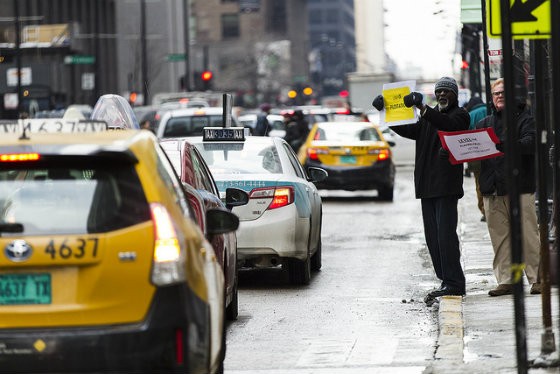 Uber says it could be ready to start taking passengers in St. Louis via its ride-sharing app, UberX, in a matter of days -- the only thing it's waiting on is regulatory approval.

But you might want to hold off on downloading the app just yet. The company's general manager for St. Louis, Sagar Shah, says that he believes Uber has reached an impasse with regulators at the Metropolitan Taxi Commission.

"We were having what seemed like productive conversations," he says. "But what they seem to be insisting on now is misaligned from the progress we thought we were making."

At issue: drug tests and background checks performed by the Missouri Highway Patrol. Currently, both are required for drivers regulated by the Metropolitan Taxi Commission -- which includes all cab drivers in St. Louis City and County, and will likely include Uber drivers, too. (The company's effort to craft a state ride-sharing plan to supplant local regulations failed to gain traction at the Legislature.)

Uber wants an exception to those two requirements. Unless the company gets it, Shah says, "it wouldn't work for us to operate here."

Lou Hamilton, chairman of the Taxi Commission, says he's still working toward a solution. But, he cautions, Uber may not get everything it wants.

"The problem with Uber is that it's their way or the highway," he says. "We will try to get creative, but there are going to be sticking points." And at this point, he says, drug tests and state-run background checks will likely be among them: "If there's a way around them, we'll have to figure that out."

Shah says the company is not trying to shirk its duty to riders -- but it's convinced the Taxi Commission's requirements are archaic. The company does background checks of its own, but they're completed electronically, without the fingerprint component insisted on by the highway patrol. And it doesn't believe in drug tests -- because passengers can provide real-time information to dispatchers, Shah says, "in effect, every ride is a drug test." Drivers who seem loopy to passengers will quickly get drummed out of the system, which Uber believes is much more effective than the "snapshot" offered by a more traditional urine test.

Overall, Uber relies on being able to get drivers into its system quickly, without in-person screenings. "Fifty percent of our drivers work less than six hours a week for us," Shah explains. "When there's excessive red tape, that turns them off from signing up -- and it doesn't enhance safety."

St. Louis is the biggest city in the U.S. without Uber service, a situation Mayor Francis Slay has been vocal about wanting to change. But negotiations between the Taxi Commission and the tech company appear to broken down suddenly on Monday thanks to a Post-Dispatch editorial calling for Uber to "compromise" with the regulators on, yes, criminal background checks and drug tests. Although Hamilton insists he had nothing to do with its placement, he admits to tweeting it approvingly -- and acknowledges that, at that point, "Uber went nuts."

The company admits to some concern about the editorial, but says the bigger problem was that it suddenly stopped hearing from Hamilton. "We've been in the dark with the Taxi Commission for the last week or so," Shah says.

But Hamilton, a lobbyist who serves the Taxi Commission in a volunteer role, says he was simply busy with his paying clients. He says his plan hasn't changed: He'll talk to County Executive Steve Stenger, who appointed him to the chairmanship, and Mayor Francis Slay, with whom he is close. Then, based on their input, he'll prepare an item for discussion at the commission's June 23 meeting. What that looks like, he says, is still a work in progress, and at least partly at the direction of Stenger and Slay.

After discussion in June, he believes the item will be ready for a vote in July. However, he says, he's recently learned that Uber drivers undergo drug tests and background checks, complete with fingerprints, in Houston, Texas -- despite the company's insistence that such regulatory hurdles will be untenable in St. Louis.

"Do we have less of a responsibility to public safety than Houston does?" he asks.

And though Uber recently released showing that 78 percent of St. Louis residents support bringing the ridesharing app to the city, Hamilton isn't cowed. "If they had asked in addition, 'Should Jesus come to St. Louis?' I have no doubt Uber would have gotten a higher percentage in the polls," he says. He's still not convinced that drug tests and fingerprints can't coexist with Uber's services.

One person who surely also noticed Uber's sky-high poll numbers is Mayor Slay. Patrick Brown, Slay's deputy chief of staff, says not only is the mayor committed to bringing ride-sharing to St. Louis, but also that "we want this done by July." The mayor's spokeswoman, Maggie Crane, adds that Slay appointed Chris Sommers, the Pi restaurateur, to the Taxi Commission specifically in hopes of getting the job done.

But, Brown says, "Uber has made concessions in almost every single market they've entered. We're not encouraging anyone at the Taxi Commission to ask for any more than what they've agreed to in other places."

And that, ultimately, could be why Uber is seeing an impasse. But Hamilton, for one, is ready. Ever since Uber and its ridesharing competitor Lyft first started making noises about entering the market last spring, he's been the bad guy, he says, even as he's tried to work to make things happen behind the scenes.

"I have been getting the literal shit kicked out of me on social media," he says.