The metro area's newest flea market couldn't contain the bustle. Shoppers spooled onto adjacent Antique Row, where more than a dozen red-brick shops sell vintage merchandise in the shade of zelkova and oak trees. Most dealers are closed on Sundays, but some opened their doors that afternoon and saw a bump in traffic. The Mud House, a cafe/restaurant five blocks west, was open too. Its line grew out to the sidewalk. Co-owner Jeremy Miller later said it as one of the highest-grossing Sundays in his cafe's six-year history.

"The St. Louis Swap Meet was a great success," Miller's wife and co-owner, Casey, wrote a few days later on the Cherokee Antique Row Facebook page. But then she clarified: "Please know that the majority of the businesses on the street are not opposing the market."

"Haters gonna hate," she continued. "The rest of us will continue to do business in harmony with everybody else."

"We all have a lot to lose if we don't wake up," Hammond wrote. "In a more perfect world, my choice would be to keep this private rather than public, but the line has to be drawn somewhere."

Below the surface of the St. Louis Swap Meet, a cultural skirmish is underway over the future of Cherokee Street.

While "Cherokee" is often uttered in the singular, it's actually two distinct worlds.

To the west of Jefferson Avenue lie the Mexican eateries, art spaces and bars/clubs that have sprouted in the last fifteen years. Call it New Cherokee: The clientele there is young, inclusive, often pierced or dyed or tattooed, and undeniably growing. New shops are popping up practically overnight.

To the east of Jefferson sits Antique Row. It's a cozier, more button-down place. For decades, the antique dealers have tried to brand their blocks as an alcove where tourists and collectors can browse through the furnishings of yesteryear.

Until recently, Cherokee's wild western half hadn't really encroached on the serene eastern half. Then along came a proposal to drop the wild element — New Cherokee — right in their backyard.

The arrival of the St. Louis Swap Meet launched a debate about fair competition. It's also brought one question to the fore. If the forces of renewal in New Cherokee are now unstoppable, as they appear to be, how will historic Antique Row manage to fit in?

Martin Casas, 34, has been active in local Democrat circles since the mid-aughts, but he grew up in Orange County, California. There, flea markets are called "swap meets." They're sprawling affairs where, he recalls, "you could buy socks, a car, a jacuzzi, clothes, furniture, a dog."

Inspired by that memory (and by the Nirvana song "Swap Meet") Casas put together a proposal last summer. His plan went beyond a typical flea market.

He envisioned a weekly event with music and food trucks that would also serve as a small-business incubator for artists, farmers, craft-makers and entrepreneurs. Each vendor would pay $25 per day for a ten-by-ten space. Those with vintage items might compete with Antique Row, Casas knew, but the extra foot traffic along Cherokee would make up for it.

Casas pitched his idea to several nearby business and neighborhood bodies. They warmed to it. He failed, however, to woo any merchants right next door to his planned project: the dealers in the Cherokee Antique Row Merchant Association (CARMA). This failure would come back to haunt him.

Feeling sidelined, a few merchants penned letters of opposition to Casas' permit application last December. CARMA's then president, Bruce Schrier, was among them. The 63-year-old owner of Interior Accents wrote that by approving the Swap Meet as proposed, "the city would be turning its back" on Antique Row.

Schrier tells Riverfront Times that he and his fellow merchants pay $50 each year to be members of CARMA. They also pay a business license fee based on their number of employees, plus an additional 50 percent of that amount to join the Cherokee Lemp Special Business District (which largely overlaps with CARMA's boundaries). All those funds, Schrier says, go to marketing and promoting Antique Row — everything from a website to special street signs to event posters to brochures to ads in the Post-Dispatch.

"We've worked hard to polish our image," he says. A market that offered only "junk" could tarnish it and siphon away business. "There are only so many dollars people will spend on Cherokee."

Schrier believes, too, that it's a "struggle between generations."

"When younger people come in and say, 'We want to fix the street, you guys are just trying to block us,' it's like, 'Hey, the only reason there's anything to fix is that we hung in there and stuck by our stores.'"

But in early May, Casas received a summons to City Hall. Someone else had appealed his permit.

Casas showed up to the Board of Adjustment's appeal hearing on May 20, fresh off the success of his first Swap Meet. More than a dozen supporters joined him. Four of them testified, including Jeff Vines, who along with his brother Randy owns STL Style, a locally-inspired apparel shop fifteen blocks west of the market site.

"We had a record sales day for a Sunday," said Vines. He pointed out that the alternative to the event was an idle parking lot. "Activating that empty space is bringing life to the neighborhood."

Speaking in partial opposition, Debra Beatey of Ruth's Vintage Clothing on Antique Row told the Board she wished only to ensure the vendors did two things: Secure a business license and pay sales tax, just like a brick-and-mortar store.

"We want a fair playing field," she said.

When Casas himself testified to the Board, he countered that he's just a landlord. If the Board burdens him with ensuring his vendors paid city and state sales tax (which adds up to 8.679 percent), it would be placing him at a disadvantage vis-a-vis the other 39 outdoor markets in the metro region. They aren't required to police their vendors, he said.

(Indeed, organizers of flea markets in Belleville, Illinois; St. Peters; and the Tower Grove Farmer's Market all confirmed to Riverfront Times that they do not take on the role of tax enforcer.)

As for the special business district fee Antique Row veterans pay, Casas pledged to personally kick in money "to help compensate for whatever they feel they've been slighted by the vendors."

In theory, Casas tells the RFT, he could check for licenses or limit what's sold at his market. "But I can't be held responsible for every vendor that doesn't make smart decisions," he says.

As of today, the Board of Adjustment has yet to rule on the appeal of Casas' permit.

The appeal, as it turns out, was filed by Mark Overton. Overton is a co-owner of Saxquest, a woodwind instrument shop on Antique Row. He's the sitting president of CARMA. He couldn't attend the appeal hearing because he was out of town.

Overton says CARMA has since voted to support the Swap Meet, provided that Casas brings his vendors into compliance with city laws. Casas and CARMA have not yet agreed on what exactly that would look like.

"I'm all for the swap meet," Overton says. "It seems like everyone's making a big deal about semantics."

The only other document in opposition in the Board of Public Service's file on the Swap Meet is a letter from Patricia Dorn. In the letter, Dorn says that she bought the building on the 1900 block of Cherokee 34 years ago. It's now her home and the site of her longtime antique shop, Remember When.

"I hope [the Swap Meet] keeps bringing people down here," Dorn says. "I wish them the best, I just think they should pay for a license like we do."

But hadn't she written in her letter that the Swap Meet would have "a negative effect" on the value of her building?

Dorn replies: "I didn't write that letter. The lady who works for me wrote it."

That lady is Shirley Wallace. As the only person to testify against the Swap Meet at two public hearings, Wallace has become its most vocal adversary.

Wallace has a history of resisting change on Cherokee. In fact, in 2007, the Cherokee Station Business Association, or CSBA, which is CARMA's counterpart on the west side of Jefferson, requested that the Gravois Park neighborhood stop sending Wallace as a liaison to their meetings. Wallace had called them "drug dealers and anarchists," the CSBA complained in a letter, and opposed both the Cinco de Mayo festival and public art installations (one of which she ripped off a building with her bare hands).

According to the minutes of Casas' conditional use hearing back on December 18, Wallace testified that the Swap Meet "will not be a good fit for the area" and "that mostly bar owners are in support of the market." At the May 20 appeal hearing, she defended the veteran dealers: "If you're going to charge all these people that are already there and that spent fifty years building this street so that it would be attractive to a flea market on the corner, then somebody needs to make sure that you follow city rules."

Wallace herself does not own any real estate or businesses on Antique Row, a public records search showed, although she is the current treasurer of CARMA and publicly represents Dorn.

Asked several times for an interview, Wallace e-mailed her response: "No." 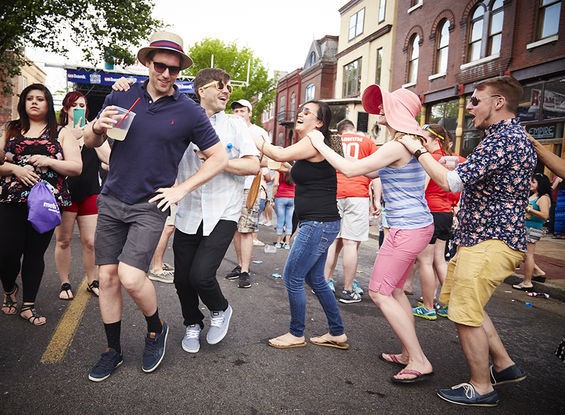 On a recent Sunday during the Swap Meet, a half-dozen customers flip through LPs at Tim Hendrickson's tiny record store on Antique Row, Dead Wax.

"I'm really out of patience with the naysayers," says Hendrickson, who also reports record sales during the Swap Meet. "It's illogical to the point of downright stupidity to be against this."

One of his shoppers is Jose Estela, who handcrafts leather goods such as wallets. Estela has rented a booth at the Swap Meet to launch his new business, Smith & Kings. He has a license, pays taxes, and aims to scale up.

The Swap Meet, he says, "teaches me how to do it it on a small scale first."

If artisans like him attract new foot traffic to the street, he says, that's not stealing.

"I know I can stand up to them," she says. Hammond has been selling books and antiques on Cherokee for 35 years.

Hammond welcomes the newcomers. "The more the merrier," she says, "and the bigger the pie is."

"You always have to bring in new people," she continues. But she has no plans to get swallowed up by the Swap Meet: "I'll probably have to die to leave here."