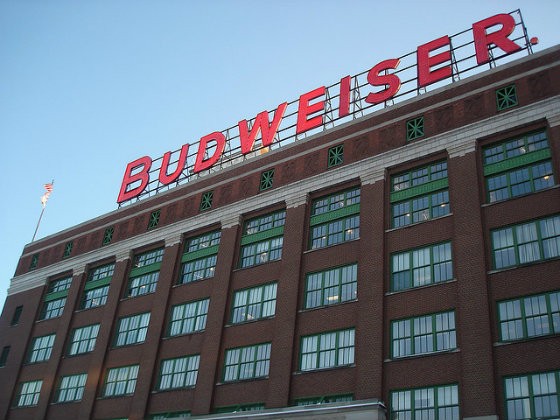 On Super Bowl Sunday, Anheuser-Busch ruffled the feathers of craft beer lovers with a snarky commercial that took a low blow at the fuss around micro-brewed beer. The A-B ad featured many frames of Budweiser bottles, foaming beer, and manly men drinking beer "brewed the hard way" at the company's Soulard headquarters.

"Let them sip their pumpkin peach ale," the commercial proclaimed. "We'll be brewing us some golden suds."

Five days later, on February 6, 2015, A-B filed a trademark application for the "intent to use" the phrase "Brewed the Hard Way."

But what A-B didn't know was that a Kansas City brewpub called Martin City Brewing Company had filed an application for a very similar trademark the day before, on February 5, 2015. The brewery sells a beer called Hard Way IPA -- and unlike Budweiser, it wasn't just intending to use the "hard way" verbiage. Its trademark application was for "actual use."

As the Kaider Law firm in Washington, D.C., later reported on its blog, the U.S. Patent and Trademark Office appears to be siding with the little guy: The blog notes that the patent office suspended A-B's application last month, pending the outcome of Martin City's application.

This isn't just a case of David vs. Goliath -- it's David vs. an international Belgium-based conglomerate.

Martin City Brewing Company began in 2011 when two friends "with a love for beer and home-brewing" started a microbrewery on a whim, their website says. The duo ventured into the restaurant business, opening a pub and pizza/taproom to host the 11 beers they now have on tap. MCBCo.'s selection ranges from a Pale Ale, to a Summer porter, to an IPA.

When we reached out to Martin City for comment, they sent us this statement:

We are excited to continue to offer our IPA, crafted the hard way. At MCBCo., we believe in the true passion that goes into every craft brewer's products. While we have no particular issues with brewing at a macro scale, we do take issue with anyone or any corporation that tries to segment a part of the population which embodies the very nature of loving beer.

It seems counter-intuitive to segregate potential customers and pass judgment on their tastes. MCBCo. believes that every person has the right to love the beer of their choice, whether it be a sour ale, creamy stout, or even a light lager.

A-B did not respond to requests for comment on the suspension of its trademark application. And, as the law firm's blog reports, the patent office's process continues; anyone who objects to Martin City's trademark will be allowed to weigh in.

But we can only hope this will make our local brewing giant think twice about continuing with that "brewed the hard way" ad campaign. It's already caused far more trouble than any commercial is worth.

We welcome tips and feedback. Contact the writer at emily.mccarter@riverfronttimes.com.

Editor's note: This story was changed after publication to better reflect the location of Anheuser-Busch's headquarters. We regret the error.