In Dark Star, H.R. Giger Is Present, But Not a Presence 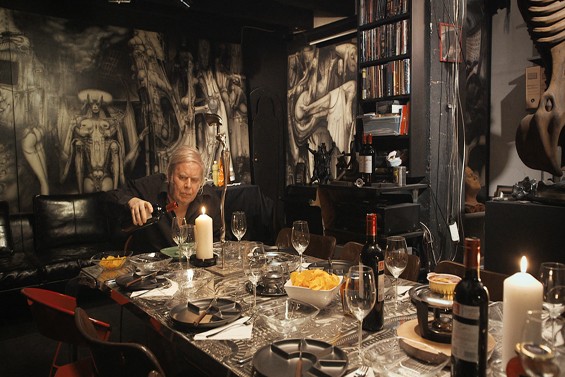 Artist H.R. Giger first entered (and seriously disturbed) the consciousness of the wider public in 1979 with Ridley Scott's Alien, which continues to spawn prequels, sequels and spinoffs -- including Scott's own Prometheus -- and an array of pop-culture detritus (e.g., toys, action figures, video games, an entire line of Aliens vs. Predator comics). Credited with the design of the titular Alien and awarded an Oscar as part of the film's visual-effects team, Giger was essential to Alien's success: His ever-mutating biomechanical critters -- whether gestating in creepily vaginal seed pods, attaching unexpectedly to a face, exploding from a chest cavity, extruding a set of telescoping metallic teeth or dispatching a crew member with a skull-popping head bite -- remain nightmarishly frightful, their primal power undiminished by the highly variable quality of the endless iterations.

Belinda Sallin's Dark Star: H.R. Giger's World explores the origins of Alien's brood and Giger's other equally unsettling creations, offering an impressionistic profile of the surrealist in his final years. Much of the film consists of long tracking shots, as the director's camera curiously probes the crowded corners and shelves of Giger's gloom-enshrouded house in Zurich, Switzerland, with its hoarder-level clutter of paintings, prints, sculptures, books and macabre objects. Despite Giger's thematic preoccupation with sex and death -- subjects that obsessively recur, often in combination, in his dream-derived images -- there's also evidence of a childlike whimsy in his home, especially in a fantastical garden that he sometimes traverses by a self-designed miniature railroad.

The film features all the usual documentary accoutrements: archival footage, interviews (with Giger, family members, associates, fans and outside experts), and vérité glimpses of the artist as he sketches, pets his cat, dines with friends and visits his own museum for a book-signing. But because Dark Star emphasizes the experiential -- those long explorations of Giger's house -- and avoids a chronological organizing structure, the film is somewhat stingy on biographical detail, which often proves frustrating.

Sadly, Dark Star also seems the victim of poor timing: Giger gives Sallin tremendous access, but he's clearly suffering from some unspecified infirmities during the film's shoot -- he died shortly after it wrapped -- and he struggles to articulate his thoughts. As he sits gnome-like in a chair or shuffles unsteadily from room to room, Giger offers occasional insights into his life and art, but he's painfully halting and deliberate in his speech, and the level of introspection is relatively slight.

Devotees of Giger's art will find much to delight them, but more casual fans will find that Dark Star fails to fully illuminate.

Cliff Froehlich is executive director of Cinema St. Louis, which presents the St. Louis Filmmakers Showcase from July 19 to 23.