Original Films Are in Short Supply, But Tomorrowland's Got It

Not at all. In fact, it's a glorious reminder — in this era of reboots and sequels — of the joy of discovery that we get far less frequently at the movies these days. To go into a film not knowing what to expect? Going to the movies used to be like this all the time.

I am not going to tell you too much and spoil that wondrous discovery for you. But it's no spoiler to say that the notion that things used to be different — a better sort of different — is the crux of Tomorrowland. The movie borrows its title from Walt Disney's postwar theme-park odes to the bright and shining future that science fiction — and reality-based science! — used to promise us. Once upon a time, the future was so much better, all gleaming rockets and cities on the moon and interstellar federations. Nowadays, the future is post-apocalyptic: hungry, despairing, dangerous. 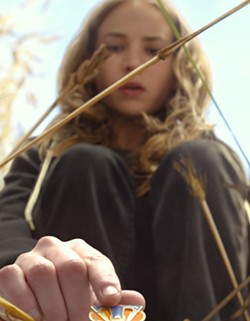 So I love Casey Newton (Britt Robertson), Florida high-school student, engineer, dreamer and perpetrator of nonviolent protest at the slow shutdown of America's collective imagination. Her dad (Tim McGraw) is an out-of-work NASA rocket scientist; her protest is connected with that. She looks to the stars and despairs that we aren't going. I share her pain. And obviously Frank Walker (George Clooney) also shares her pain, or did once and now laments the loss of the same sort of optimism in himself. It takes him a while to realize this. He has become a cranky old man. Frank was once like Casey, albeit in a time that was more conducive to being a crazy dreamer: when he was a kid (Thomas Robinson), he went to the World's Fair in 1964 in New York City to show off an invention: a jet pack! It's not just intelligence and creativity and optimism that Casey and young Frank shared, but also a stubbornness, an unwillingness to give up in the face of disdain from others and seemingly insurmountable odds of what they hoped to achieve. And this is what catches the eye of the mysterious Athena (Raffey Cassidy), who invites them to a place Somewhere Else where everyone is like them...

Tomorrowland flips back and forth between young Frank in the 1960s and older Frank and Casey today — circumstances bring them together — and is not unsympathetic when it comes to showing how cheery young Frank turned into pessimistic older Frank. Frank is all of us, and despair is easy. But that is the problem, too: Despair is too easy. Fixing things is harder. Yet it takes so little to turn off despair! The vision of this other place that we glimpse along with Frank and Casey is intoxicating, particularly for how long it has been since we've seen anything quite like it in our collective fantasies. I wanted to linger longer with Casey as she takes a tour of "Tomorrowland," all shining towers and functioning civic spaces and happy people full of purpose and...well, when Casey's ride on an anti-grav subway culminates in the automated conductor announcing "Now arriving: Spaceport," I am not ashamed to tell you that my eyes welled with tears of geeky joy. We need to hear things like that. So we can imagine that they are possible.

Tomorrowland gets rather heavy-handed delivering this message — we need hope! we need imagination! — in its finale, but I can forgive this, because we really do need to hear these things said, and then we really do need to accept them and engage in them. At one point, Frank, while he's still cranky and cynical, accuses Casey of being "too smart for your own good," and that's another thing the film ultimately disposes of as being nonsense. There is no such thing as "too smart for your own good." Only "too disheartened to fix the things that need fixing." We will need smarts, along with hope, to fix them.