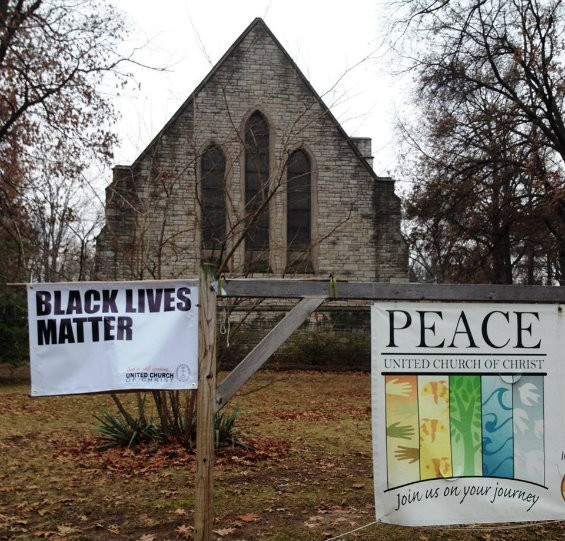 A fourth church in the St. Louis area is reporting that its "Black Lives Matter" sign has been stolen. Reverend Bob Molsberry of Peace United Church of Christ in Webster Groves says the 2-foot-by-3-foot vinyl sign had been hanging outside the church since the winter, only to suddenly disappear this week.

"I'm almost thinking it's not local in our Webster Groves area just because it was up for so long," he says. "It didn't seem to be a matter of controversy."

The theft in Webster Groves is the latest in a series targeting the signs, whose slogan has been used at many protests around the country in the effort to combat police brutality against people of color.

Molsberry says he saw his church's sign as recently as Sunday afternoon. By Tuesday it was gone.

Molsberry's congregation is mostly white, he says, but members have been supportive of the message.

"We have folks that are related to first responders and policemen as well, but it's a congregation that's very dedicated to peace and justice issues," he says.

Daily RFT also heard from one Ladue homeowner who had his lawn sign stolen just 30 minutes after he put it out. He asked that we not identify him.

"The thievery of these signs has been going on for weeks now, and seems rapid and aggressive, if not formally organized," he writes. "Fortunately, our next-door neighbor's sign...has now survived for at least two months."

Molsberry echoes the sentiment that the theft of the signs seems to be organized.

"I think something new is happening," he says.

The minister also did something that the other churches in the area have not: He called the cops. He says he wants there to be a record of a pattern of thefts.

"It's frustrating because it's part of our religious expression," he says. "People are telling me to buy a bigger one. We're going bigger."

See also: Someone is Stealing "Black Lives Matter" Signs From Churches and Homes

Has your "Black Lives Matter" sign been stolen? Let us know.