Keith Esters, Megan Boken's Killer, Has Nothing to Say About Cornell McKay 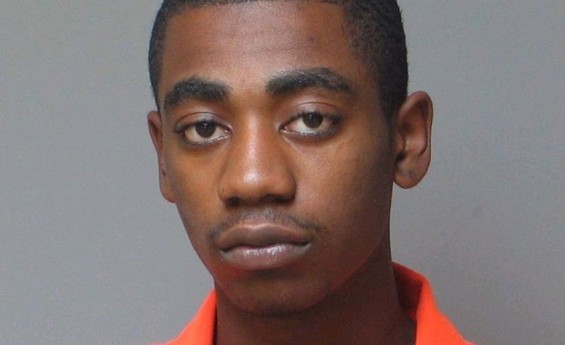 Sentenced to life in prison, the 21-year-old inmate has plenty of time to think about the steps that led him to a cellblock in the South Central Correctional Center. The key date in Esters' story? August 18, 2012, the day he pointed a gun at Megan Boken, announced he was robbing her, and found himself scuffling with the former Saint Louis University volleyball player over a cell phone. Then Esters shot Boken in the head and chest, killing her. He would later plead guilty to her murder.

Prison life, he says, is something he can handle.

"I ain't just sitting in here, but for right now I'm just doing me, just doing this bid," Esters said when reached by phone. "It's alright. It feel like I'm at the crib, for real. I don't really trip off this shit."

But Esters' history of violence contains a mystery: Did he rob another woman eight days before the Boken murder? It's a question that weighs heavily on Cornell McKay, who spent nearly three years in prison for the August 10 robbery, even as his lawyers argued that Esters was actually the perpetrator.

While the victim of that robbery identified McKay as the perpetrator, all available physical evidence -- such as the victim's stolen phone -- pointed to Esters, as we detailed in our cover story last week. McKay's lawyers have argued that if police had apprehended the right man for the August 10 robbery, Boken might still be alive today.

See also: Police Insisted Cornell McKay Was to Blame for a Robbery -- It Cost Him Nearly Three Years

The lawyers fought to get McKay out of prison. And eventually, after numerous appeals, the courts agreed that they should be allowed to present evidence about Esters' culpability to a jury.

But before a new trial date could be set, the state's star witness -- the victim of the August 10 robbery -- told prosecutors she could not endure another trial. Without her testimony, the prosecution's case fell apart. McKays charges were dropped. On May 7, he was released from prison.

Despite McKay's happy ending, many questions remain: Did Esters commit the August 10 robbery? If not, does he know who did? And how did he end up in possession of the cell phone stolen that day?

Daily RFT reached Esters by phone on May 7, just hours before McKay would walk out of prison a free man.

When asked if he'd heard about McKays' charges being dropped, Esters responded with a string of denials.

"I don't know about none of them cases," he said. "All I know is about the case I'm down for. Other than that, I ain't up for discussion of another case. I ain't got nothing to say about any of that. None of it."

Esters sounded far more cagey than in his last public remarks, made during a March 2014 interview with St. Louis Post Dispatch reporter Jennifer Mann. In that interview, Esters seemed to hint that he would divulge information about the August 10 robbery, but only if it came with a deal to decrease his lengthy sentence.

"I'm not willing to help them just to help somebody else if it ain't going to benefit me," Esters told Mann. "In the end, he gonna need my help in his case."

This time around, Esters was unwilling to make any direct statements about McKay, and he refused to confirm or deny his role in the August 10 robbery.

Yet he did address the account of Jerone Jackson, a homicide detective with the St. Louis Metropolitan Police Department, who claimed Esters talked about the August 10 robbery shortly after his arrest. Jackson said Esters wanted to strike a deal on his pending criminal charges and declared that he'd been at the scene of the robbery, he knew who did it -- and it wasn't him or McKay.

During the May 7 interview with Riverfront Times, Esters denied ever attempting to make such a deal.

"Nah, I didn't try to do that," he said. "I wouldn't go into no deal with them, I don't know what the fuck they talking about."

In other matters relating to the case, Esters provided little more than profanity and obstinance.

For example: Did Esters ever count McKay as a friend or acquaintance?

Esters: "I won't talk about other cases."

Did Esters and McKay have a conversation in a holding cell just days before McKay's trial? Did Esters implicate himself in the robbery, as McKay claims?

"I ain't got nothing to say about that either."

Did prosecutors or detectives ever talk to Esters about the August 10 robbery?

"I don't give a fuck what they do. Just keep all that shit away from me," Esters said finally, seemingly frustrated by the line of questioning.

"Motherfuckers be thinking I don't know what's going on, but I know," he added. "I know everything before a motherfucker even come to me. So, like your call, I knew what your intentions was."

Shortly before ending the interview, we asked Esters about Megan Boken's murder.

In the years following her death, the Boken family championed the introduction of a mandatory "kill switch" for cell phones as a way to eliminate the robbery incentive for criminals like Esters, who targeted Boken after spotting her talking on an iPhone.

When we brought up the subject of the murder and Boken's family, Esters showed no sympathy.

Whether Esters' responses reflect a lonely man's bluster or the ranting of an unrepentant killer, we may never know. But unless Esters opens up about what he does know about the August 10 robbery, those answers will stay with him, day after day, prison cell after prison cell, year after year.

"I ain't going through nothing," Esters insisted, just before hanging up the phone. "I'm still living my life. I tell you the truth, I'm doing good. Everybody want to hang out with me, so it ain't nothin to me. I'm a real nigga, so I stick to myself and just enjoy that shit. This shit easy, for real."