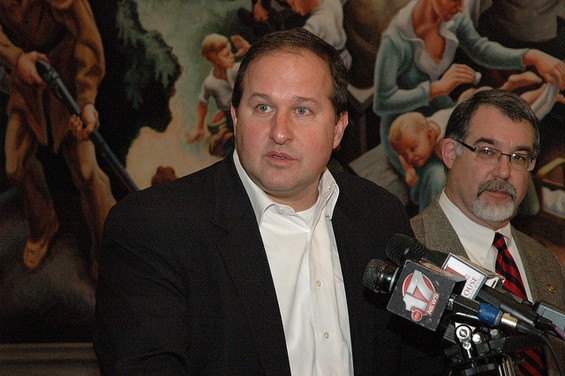 It's hard to describe the final week of Missouri's legislative session, which ended Friday, without profanity. Boondoggle? Quagmire? A parade of oopsies?

Not good enough. The scandalous weight of Republican Speaker of the House John Diehl Jr.'s resignation — which followed revelations that he'd been sexting a 19-year-old intern — can't be contained by the bounds of civil discourse. If we're being honest, Diehl's downfall feels more like a moral clusterfuck, or at best a contemptible outbreak of corruptive shitbaggery.

Which is why we want to take this opportunity to reach out to you, Male* Missouri Legislator. We know these recent events have complicated your already challenging job: From choosing a lobbyist to pay your lunch bill to determining how best to regulate Missouri vaginas, you've got enough to worry about without wondering how you're going to continue exchanging sex-drenched messages with your nubile college-aged intern.

[*Sure, women are no less capable than men of political corruption. But let's not kid ourselves here. If you're a politician chasing a younger intern, we're betting you're a dude.]

See also: Speaker John Diehl Hides in His Office for Nine Hours, Then Denies He Had Sex With Intern

They say it takes two to tango, but it sure helps when one of the dance partners — Diehl, for instance — can text from his dinner seat next to Governor Jay Nixon or send pictures of himself posing in front of a Rolls Royce.

Really, if we've learned anything from decades of political sexcapades, it's that you can go a long way with just the perception of importance. And if you do occupy an important position, congratulations! That means you're sitting near the top of a political bureaucracy that's built on free lunches, fast handshakes and endless entitlement — so try to not feel guilty as you get off sexting an intern at the lowest rung of that system.

Which leads to our next point...

2. Spread That Lobbyist Love to Your Young Admirer.

Now that Diehl's been outed, we're sure he's kicking himself that he didn't take his paramour intern Katie Graham out on more lobbyist-funded dates.

And it's a shame, too. If there was ever a legislator who knew how to score sweep comps from lobbyists, it was Diehl: before he was busted for sexting, he was widely criticized for enabling legislators to hold official hearings at a country club while dining on meals paid for by the industries they were supposed to be regulating. Only after reporters crashed one of these "hearings" did Diehl finally do away with the practice.

The generosity of special interest groups shouldn't just pad your own pockets, Mr. Legislator. That intern may be a treasured distraction from your busy professional life, but he/she is also a person with needs.

However, if that intern is a she, you've got another thing to keep in mind...

Sure, sending racy texts to a much younger woman is great fun, but we're assuming that eventually you'll take your canoodling beyond the digital realm. That means you face the risk of getting caught with your pants literally around your ankles, or worse — it turns out the biological process of sexual intercourse with interns may result in an unintended pregnancy. Shocking, we know.

So, before you knock up your intern, it's important to evaluate your principles. Have you, like Diehl, supported sweeping restrictions on the state's abortion providers and women seeking the procedure? Did you help beat Governor Jay Nixon's veto of a bill allowing employers to cite religious beliefs while denying birth control coverage? Have you been praised for "demonstrating moral leadership" by the Missouri Family Policy Council?

If you answered yes, it may be time for some introspection. It's much easier to get away with this sort of thing if people can't accuse you of holding a double standard. Beyond that, you don't want your sexy, millennial intern thinking you're some kind of hypocrite, right?

4. Try Not to Ruin Your Intern's Internship.

Among the saddest notes in the Diehl scandal was that four Capitol interns from Missouri Southern State University were sent home last month, presumably after the school learned Diehl wanted to leave one of those interns "quivering." Even worse, the college has not yet announced whether it will continue sending interns to Jeff City in the future.

Frankly, that sucks. If you, Mr. Legislator, want to send winky-face emoticons to a 19-year-old college student, that's fine; but don't ruin a bunch of other students' resumes in the process.

Our suggestion: If your boner wrecks a college intern program, call your lobbyist buddies and reserve three or four spots clearing buffet tables at the next Telecommunications Committee "hearing." Those former interns will hardly know the difference. Probably.

5. Stand By Your Principles Even As Everything Falls Apart.

Alas, all good things must end. Maybe your fall will come courtesy of a nosy journalist, aggrieved political opponent or the intern herself. Inevitably, someone will expose you.

Picture the scene: You're standing behind a dais, facing a pack of rabid reporters who have been camped outside your office for several hours. It's time to face the sleazy music, which means whipping out a pitch-perfect resignation speech. Traditionally, the speech should sound like a soulless mad lib, totally devoid of human emotion or regret. Try talking about your legacy, or maybe how you contributed to the sort of partisan gridlock that made this year's legislative session a historically ineffective embarrassment.

If you're still stumped, here's an outline of a suitable resignation speech, patterned after the one Diehl delivered last week. We've included a few options, depending on the situation and tone.

Now, just get through this last step and you can start packing up your office and planning your memoirs.

In my time in [name of legislative body/name of political party/name of intern], I'm proud of my long [legacy/track-record/penis] that was built upon being honest with members and doing what is in the best interest of my caucus and this body. I am proud to have led us to the largest [name of political party/name of favorite sports team/name of sex position] in state history, the first [fuel tax/cat tax/tax tax] in nearly one hundred years, and an override of the governor's veto of [income redistribution/corporate bailouts/secession].

I have acknowledged making a serious error in judgment by sending the text messages. It was [wrong/wrong/wrong], and I am truly sorry. Too often we hear leaders say they're sorry but are unwilling to accept the [consequences/scrutiny/public spanking.] I understand that, as a leader, I am responsible for my actions and I am willing to face [my constituents/my mother/my wife].

I appreciate those who have [stood/slept/bent over] beside me and the overwhelming number of caucus members that have offered continued support; but for the good of my [party/family/future book deal], I'm not going to further jeopardize what we have accomplished this year and what can be accomplished in the future. Therefore, I will be resigning my position of in a way that allows for an orderly transition.

Got all that? Good. Now you're ready to make 'em quiver. And who knows? Play your cards right with this one, and you could end up riding this scandal all the way to riches and status as an elder statesmen. Worst case scenario, there's always Baskin-Robbins.