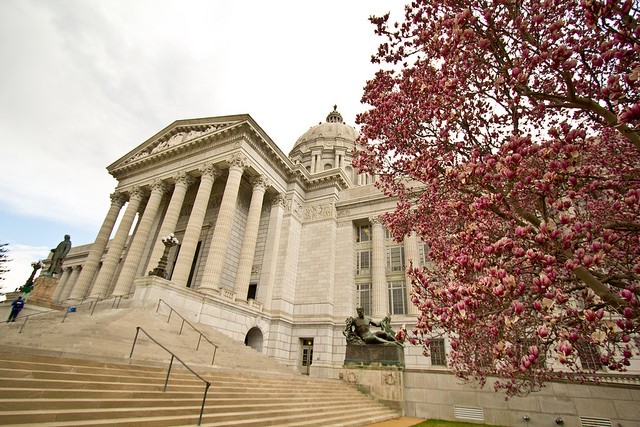 Last night, after former speaker John Diehl Jr. announced his resignation, the Republican caucus gathered to select a new Speaker of the House.

Earlier, Diehl had indicated he would not vacate his post -- even after the Kansas City Star busted him for sexting with a 19-year-old college intern. But yesterday afternoon he sent out an announcement that he is resigning "for the good of my party, the caucus, and the state."

The caucus emerged from their discussions to announce that House Majority Leader Todd Richardson will take Diehl's place as speaker. A formal vote will take place today, the last day of the session.

But it was the intern who stole the spotlight last night -- she went public with her first statement about the incident and identified herself. She's Katie Graham, a Missouri Southern State University student originally from Olathe, Kansas.

Statement of Katie Graham on the resignation of the Speaker of the House:

I want to thank everyone who has reached out to me during this difficult time. Your support means a lot. This is extremely difficult for both families, and I hope everyone can begin the healing process. I strongly support the Missouri Capitol internship program, and hope it remains a positive experience for other students in the future.

According to Graham's Facebook page, she began work at the capitol in January:

Meanwhile, Diehl joined a few colleagues, including Democratic Senator Jamilah Nasheed, for appetizers and a few Buds. Nasheed says she and Diehl have been friends since 2008 and had a good, bipartisan working relationship.

"I'm sure he's taken aback by his conduct and whatnot, but he seemed to me -- he talked a little. He didn't talk a lot," she says. "It didn't seem to me that he was happy or sad. Everybody makes mistakes. He apologized for his mistakes -- what more can you ask for?"

My #strategist for life! pic.twitter.com/ZvOKNIy9K6