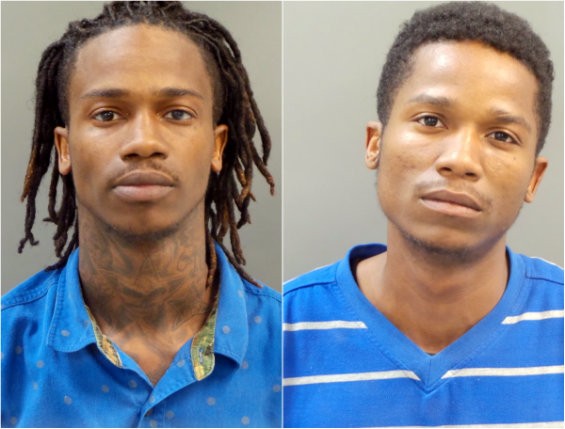 Update 4:45 p.m.: The St. Louis Circuit Attorney's Office has charged Dorian Johnson -- a key witness in the Michael Brown case, and also the plaintiff in a suit against the city of Ferguson -- with "resisting or interfering with arrest/detention/stop" for trying to prevent a police officer from arresting his brother, Damonte.

The rumored drug charges against Dorian Johnson, however, have evaporated. The drink Dorian discarded, described to the Post-Dispatch by an anonymous police source as "cough medication mixed with what police believe to be an illegal narcotic," tested negative for drugs.

"A drug charge was brought to our office. It was refused by our office," says Lauren Trager, spokeswoman for the circuit attorney.

That doesn't mean the Johnson brothers are in the clear. Not only does Dorian Johnson face a charge of resisting arrest, but Damonte Johnson has also been charged with resisting arrest, as well as 3rd degree assault against a police officer.

Damonte allegedly grabbed the officer's arm and told him he couldn't arrest O.M. When a second officer grabbed Damonte's arm, Dorian ran over and tried to stop the officer, according to the probable cause statement.

"Dorian further stated that the police could not arrest any of them," one of the officers wrote. "Dorian Johnson then struggled with me and tried to pry himself away from me. I had to physically struggle with Dorian Johnson until I was able to take him to the ground and get handcuffs on him."

Here are the charging documents:

"He is working and he is also making final arrangements to enroll in and attend a four-year university, which I'm very excited about," attorney James Williams said yesterday. "We think that's a very positive move for him."

In a text message, Williams told Daily RFT he does not yet have the details of what occurred.

The St. Louis Metropolitan police department sent this account of the arrest of three men yesterday. They do not name suspects until charges are filed with the St. Louis Circuit Attorney's office:

Incident: Resisting/Interfering with Arrest Location: 5700 block of Acme Date/Time: 5/06/15 @ 15:21 Victim: St. Louis Police Officer Suspect #1: 17-year old black male (wanted in another jurisdiction) Suspect #2: 21-year old black male Suspect #3:​ 23-year old black male Officers responded to the 5700 block of Acme for a call reporting a large group of subjects who were possibly armed with firearms. Officers arrived and began to disperse the crowd. An officer approached Suspect #1 after observing that he appeared to have a bulge in his clothing. As the officer approached Suspect #1 to check him for a firearm, Suspect #2 grabbed the officer's arm in an effort to prevent him from patting down Suspect #1. The officer then attempted to detain Suspect #2 as he resisted arrest. Suspect #3 then approached the officer, stood in close proximity to him, and yelled in an attempt to keep him from detaining Suspect #2. Suspect #3 was also seen discarding suspected narcotics onto the ground. Suspect #3 was then taken into custody without further incident. There were no injuries. Suspect #1 was found to be "wanted" in another jurisdiction. Suspect #2 and Suspect #3 are in custody and warrants will be applied for tomorrow. The investigation is ongoing.

However, according to the P-D, either suspect #2 or suspect #3 is Johnson. That would make him either the man who grabbed the arresting officer's arm or the man who yelled at the officer and was allegedly seen discarding narcotics. The P-D says that Johnson had " a cough medication mixed with what police believe to be an illegal narcotic on him." The other two men are identified by the paper as his brothers.

We will continue to update the story as we learn more. Stay tuned.

Correction: Because the charging documents spelled Dorian Johnson's brother's name "Demonte," that is also how an earlier version of this post spelled it. It appears the correct spelling is "Damonte." We regret the error.