Epic Reel of Vintage St. Louis News Outtakes Is Like Anchorman, Only Real 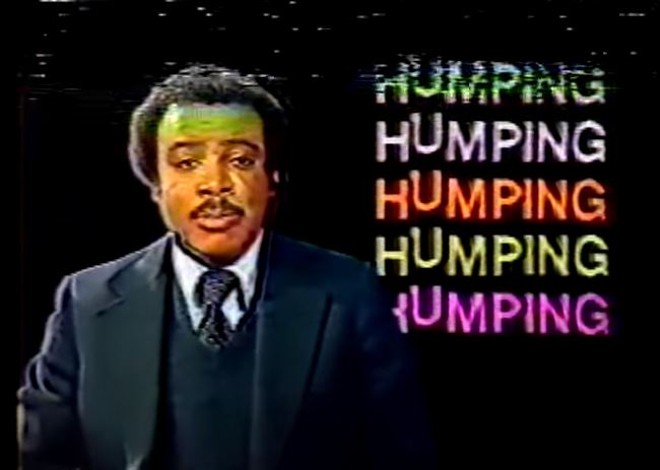 "First, bend over, grab your knees, put your head between your legs and kiss your ass goodbye."

And with that, former Channel 4 weatherman Mike Fenwick kicks off what is surely the most bizarre and wonderful peek into the pastel-and-plaid world of St. Louis broadcast news in the 1970s and 1980s. The clip of Fenwick telling his viewers to inspect their posterior Doppler readings comes courtesy of YouTube user St. Louis Flashback, a self-described St. Louis historian who posted two jaw-dropping videos over the weekend.

Edited with an insider's glee, the two-part "St.Louis Local TV News Bloopers — 1970s-80s" actually features only a few clips of the kind of news bloopers one would usually find on YouTube. Instead, most of the 50-plus minutes of footage reveals the behind-the-scenes antics and obscenity-filled rivalries between the most trusted faces in St. Louis news — including well-known anchors Elliott Davis and Larry Conners.

"St. Louis Flashback" didn't want to give his real name, but told us, "I collect these things — anything from local TV, movie theaters and KXOK radio. I don't give out names or how I got the items." He adds, "I know people people who have worked in all media since the '60s."

And some of those people's colleagues are surely red-faced now that this video is out there. There may be no Sex Panther cologne or hand grenades, but we guarantee that after watching reporters whipping out their "solid journalistic tool" or demonstrating how to build a ballpoint pen from your wife's douche-nozzle, you'll wonder if Anchorman wasn't actually a documentary focusing on the golden age of local news in St. Louis.

Here are a few screen grabs of our favorite moments from both videos. Part 2 is embedded in full at the bottom of the story:

First of all: yes, that is current "You Paid For It" host Elliott Davis of Fox2 standing at the scene of a massive blaze, which has apparently turned an Air National Guard outpost into an apocalyptic hellscape. Yet despite Davis' resplendent afro and badass leather jacket, it appears that a bunch of broadcast reporters heard Davis sign-off "I'm Elliott Davis ... at a destruction" and promptly lost their minds.

What follows after the Davis clip is a series of juvenile parodies, proto-memes that predate the internet by decades, that only get weirder and more committed. The decomposing remains of a deer skull make an appearance, and even Larry Conners gets in on the action.

2. A Journalist is Always Ready for an Interview.

A well-produced clip that was seemingly filmed for the Channel 2 staff's own, um, personal enjoyment, this reporter demonstrates that a real newsman always keeps his tools handy and within immediate reach.

3. Got Your Condolences Right Here.

Any good news producer will tell you that there are times when you're forced to deal with an unwilling subject. In this case, it seems this especially unwilling pall-bearer wasn't going allow the somber funeral atmosphere restrain him after spotting a camera crew across the street.

Best known for anchoring at CNN, Patrick Emory spent several years in St. Louis, including a two-year stint from '73 to '75. After his departure, we'd like to imagine that his outfits were buried deep beneath the Gateway Arch in a cement-sealed bunker, where they could never harm anyone ever again.

This clip, taken from Part 2 of the blooper reel, arrives with no context and no explanation. But the weirdest part isn't just that this anchor is pantsless, but that this clip jump-cuts to a close-up shot of a polar bear taking a massive shit. What does it mean? Is this an inside joke? We may never know. We can only appreciate the mystery and move on.


Update 3:30 p.m.: The man behind "St. Louis Flashback" has removed the videos from YouTube. We've reached out to him and we'll update the story when we know more about the situation.

Updated Update 3:55 p.m.: The videos have returned to YouTube.