A Former Banking CEO Wants to Solve Prison Recidivism in St. Louis -- and the Entire Country

"The purpose of the group in terms of the strategic plan is really just to answer one question, and that was, 'With proper resources and evidence-based practices could we dramatically lower re-incarceration rates and do it in a scaleable fashion?'....We concluded the answer to this question was a resounding, 'Yes.'"

That's what former Wells Fargo Advisors CEO Danny Ludeman told a well-heeled crowd of about 200 yesterday at the Missouri History Museum. Ludeman surprised many when he retired in 2013, leaving his powerful post at the helm of a brokerage firm that managed $1 trillion in assets. At the time, he told the press he was doing it to "be selfless."

Years later, that promise has finally taken shape with the launch of the Concordance Academy and Concordance Institute, two arms of a new nonprofit organization whose goal is to end prison recidivism and dramatically reduce crime in St. Louis.

But Ludeman's vision does not end there. He wants to expand to the entire country eventually, changing the culture of prisoner reentry into society nationwide.

"Today is about introducing something that has never been done before," he told the room of businesspeople, attorneys, nonprofit workers and politicians. "A holistic, evidence-based set of solutions."

The first class of Concordance Academy of Leadership men and women will be selected and begin their experience while still in prison -- six months before release -- in December. The goal is for all members to have their high school equivalency upon release, as well as a job. Sixty inmates will be provided a raft of services from Ludeman and his team, everything from housing assistance to substance-abuse counseling in both an in-patient and out-patient setting. Concordance will employ its own staff attorneys and offer spiritual guidance with the help of 50 houses of worship already committed to the program. The idea is to provide all these services in-house, as opposed to contracting them out to different partner agencies.

"I think you need to understand them in order to serve them," Ludeman said of inmates facing reentry. "All the services we will be offering at the academy will first be researched." 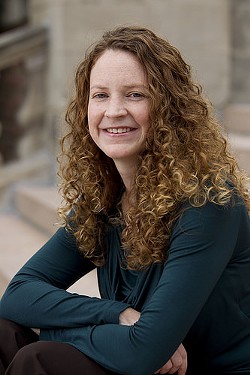 To that end, the Concordance Institute for Advancing Social Justice will track the academy's class in order to provide meaningful data and feedback to show what works in this reentry population. The institute will be operated by the Brown School at Washington University, with Dr. Carrie Pettus-Davis -- a leading scholar on prisoner populations -- at the helm.

"Seventy-seven percent of all released prisoners end up back in jail. Prisoner reentry is not a quick and easy issue to address," she said. "St. Louis, we are the ones to lead our country out of our incarceration crisis."

"Thirty years ago we thought the war on crime, the war on drugs was the answer," said Isom during a panel discussion. "We should incarcerate people. We should give them long sentences and that would solve the problem. That might be the case if they never come back. But they do."

Ludeman has spent the last ten months raising $8.5 million for the academy and the institute, with his $9 million goal in sight, he said. While funds came from the state, city and two counties, as well as from five large local nonprofits, about $4.5 million came from the business community. Donors include Enterprise, Commerce Bank, Maritz, Energizer and Ameren.

Each program participant will cost the organization about $15,000. The first year's class will service 60 inmates; the program will slowly scale up to 80 participants in the second year and 110 in the third. One-third of each class will be women and two-thirds will be men, likely from three different correctional facilities: Bonne Terre, Eastern Correctional and the women's prison in Vandalia. These institutions were selected because the majority of their inmates return to the St. Louis area.

For each Concordance Academy class there will also be a control group studied by the Institute, who -- while receiving some services -- will not enjoy the Academy's holistic, one-stop-shop approach. Both groups will be monitored for five years.

"Once we can prove we can dramatically lower re-incarceration rates, then we'll expand to other cities in Missouri," said Ludeman.

From there, Ludeman hopes to replicate the program nationwide.

Ludeman closed by announcing the nonprofit's first gala, which will take place on November 20 at the Ritz-Carlton. The keynote speaker will be former secretary of state Colin Powell.

As the program ended and the crowd moved to the terrace for hors d'oeuvres and wine, Thomas Harvey of the ArchCity Defenders expressed optimism about the program's chances.

"If elite, wealthy white people care about the reentry population and dedicate resources to it, that is amazing," he said. "It helps to have someone like Danny Ludeman lead it."