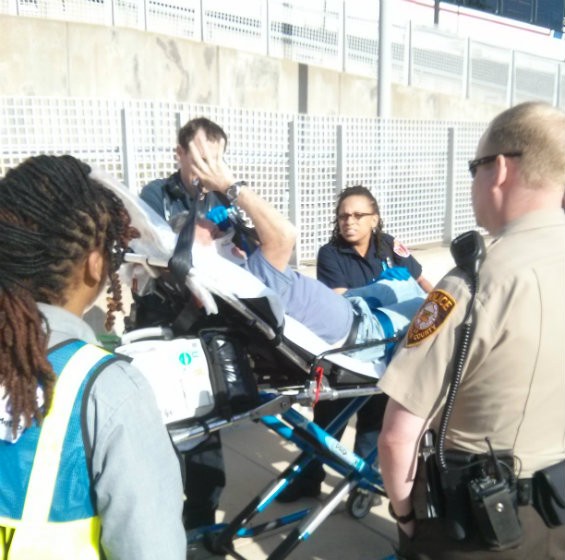 UPDATE: We updated this post around 1:50 p.m. with new info from the St. Louis County Police Department. See update at the bottom of the post. We also updated around 6:45 p.m. with additional eyewitness information about the fight.

An incident on MetroLink's Blue Line turned ugly last week, when a drunk man making racial slurs apparently hassled a woman exiting the train at its Brentwood station. She whacked him with her purse, a witness tells Daily RFT, and made it off the train.

But another passenger was fed up with the man's belligerence, says the witness. That passenger clocked the intoxicated man.

And that's when things got really screwy.

As our witness, who asked to be referred to only his first name, Chris, would later write in a complaint to Metro,

[The drunken passenger] collapsed and hit his head hard, knocking him unconscious in the doorway of the train. He was also bleeding from his head.

I and several other passengers told the operator to hold the train at Maplewood and call EMS and police. He literally screamed at us to not hold the doors open, that the train needed to keep its schedule, and that police would meet us at Shrewsbury. [The drunk man] came to and eventually started punching the glass of the door, and began prying the doors open on sections of elevated track. The operator refused to hold the train at Sunnen as well.

Another passenger and I had to subdue this violent man until we reached the Shrewsbury terminus. This unpredictable, violent man was locked into the train with passengers.

When the train arrived at the Shrewsbury station, Chris was certain the ordeal was over. But greeting the passengers was one lone female security guard. The police department was nowhere in sight, nor were EMS workers.

And the driver's behavior didn't exactly inspire confidence. As Chris wrote in his complaint to Metro, "The operator paid absolutely no attention to the security guard or passengers trying to assist her, as he adjusted the mirrors to the train and got back into the driver's cabin on the opposite side."

Even after that call, it took 30 minutes from EMS to show up, Chris says, with county police officers another six or seven minutes after that. For that half-hour, Chris tried to assist the security guard -- but the drunk man continued to use racial slurs, this time against the security guard. He then insisted on wandering off down a ramp. When the guard and Chris followed him, they found he'd fallen and hit his head.

Chris is a regular MetroLink rider. "I've been riding the Blue Line since it opened," he says. "I've seen it all during that nine years." But this incident rattled him; he couldn't believe the driver wouldn't stop the train to get the violent drunk away from the other passengers -- and he couldn't believe no one called the police to make sure they (and not just a lone security guard) were waiting at Shrewsbury.

Patti K. Beck, director of communications for Metro, said that the agency is investigating the incident. She confirmed that a supervisor on the train saw the disturbance at the Brentwood station and called for security assistance -- but that it was determined that the fastest response would be eight minutes later, when the train was scheduled to arrive at the Shrewsbury station.

The supervisor continued to monitor the situation while the train was en route to Shrewsbury, Beck said. "We are aware of two Metro employees on the train at the time -- the MetroLink operator and the MetroLink supervisor. Their actions will be reviewed as we do with any incident on the Metro system."

Beck could not say when the St. Louis County police -- and not just MetroLink security -- were called. She questioned whether the passengers felt they were truly in jeopardy by the drunk man's continued presence on the train. The woman who was initially targeted by the man got off at the Brentwood station, she said, but no one else did. "They could have gotten off there. They could have gotten off two minutes later at Maplewood, or two minutes after that at Sunnen. No one did."

Chris agrees that passengers could have exited -- but isn't impressed with the idea. "Instead of one person causing an incident being forced to get off, they wanted the other 120 people on the train to exit?"

We've reached out to the St. Louis County police to see when they were first notified of the incident -- and whether it was MetroLink or a passenger who called them. We'll update this post when we hear back.

In the mean time, Beck advises MetroLink passengers to call 911 if they "become aware of a situation requiring police attention."

UPDATE at 1:50 p.m.: We heard back from the St. Louis County Police, and they say they first received a call about the incident at 4:36 p.m. The call came from Metro.

Our witness, Chris, tells us that is almost exactly the time that the train pulled into the Shrewsbury station -- a fact that also tracks with MetroLink timetables. While it sounds like someone at Metro did ultimately contact the police and not just internal Metro security, the timing seems to confirm his theory that no one bothered to do so until quite a bit of time after the original incident. We'll continue to update as we learn more.

UPDATE AT 6:45 p.m.: We connected with another MetroLink rider who witnessed the altercation that day. Linda Nichols rides the train daily -- and had an even better view of the initial incident than Chris.

"I'm a seasoned commuter, so I'm not somebody who gets scared easily," Nichols tells us. "But this really escalated into a bad situation."

Initially, Nichols witnessed the drunk man spewing racial slurs at top volume. That set off some young women on the train, who responded angrily and would have charged him if they hadn't been held back by other passengers.

Even then, the drunk wouldn't shut up -- and he continued to rant after the woman leaving the train at the Brentwood stop whacked him with her purse, leaving him bloodied. After the man began to fight with a male passenger trying to restrain him, the passenger pulled out a Taser and shocked him, Nichols says.

Still, the man was soon up again, which is one reason Nichols is so horrified that police were not called immediately.

"I was appalled by the apathy of the driver of the train," she says. "This guy was trying to open up the doors while the train was moving. If it wasn't for Chris and this other gentleman holding him back, he could have easily busted open the doors on an overpass. If not for them, I don't know where this would have gone."

At Shrewsbury, Nichols confirms, there was no police presence waiting -- just a lone security guard, one who happened to suffer from vision problems. "This poor girl was doing her best, but she could no more handcuff him or hold him than I could," Nichols says.

We welcome tips and feedback. Contact the writer at [email protected]