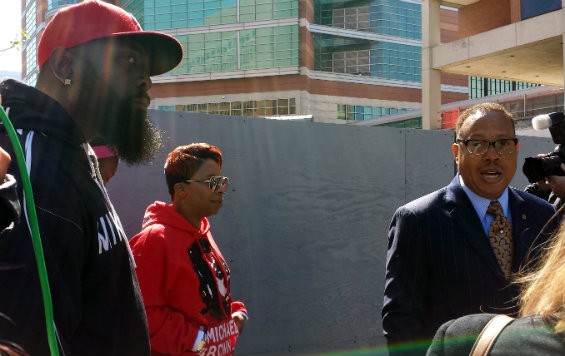 At a press conference this morning, attorneys for the family of Michael Brown Jr. announced the filing of a lawsuit against the City of Ferguson, former police officer Darren Wilson and former police chief Thomas Jackson.

Before the press conference began, Brown's mother Lesley McSpadden, his aunt Brittanie McSpadden and his grandmother Desuirea Harris gathered across the street from the St. Louis County Courthouse. Daily RFT asked Harris if a positive outcome from the lawsuit would be of any comfort to her.

"He's breathing this air we're breathing," Brittanie said of Darren Wilson. "[His arrest] is the only thing that would make me feel a little bit better."

Brown's mother called the lawsuit "just another part of the journey."

The 44-page lawsuit, filed this morning, characterizes Wilson as the aggressor in the fatal encounter. It says that after Wilson told Brown and his friend Dorian Johnson to "get the fuck out of the street," he then reversed his vehicle, stopping "only inches" from Brown then detained him "unjustifiably and unreasonably." It says Wilson threw his door open, and that it ricocheted off of Brown, which "highly upset" Wilson. The suit alleges that Wilson grabbed Brown and drew his gun, firing a single shot that hit Brown in the hand.

It characterizes Brown's final moments this way (emphasis ours):

At one point, MBJ's body seemed to suddenly jolt either from receiving and/or hearing an additional shot(s), which rang out as he was fleeing with his back to Defendant Wilson. After running for several yards, MBJ appeared to realize that he was badly bleeding and vulnerable to imminent death or more bodily harm by Defendant Wilson. In a final attempt to protect himself, and prevent additional bodily harm and/or imminent death, MBJ turned around and raised his hands in a non-threatening manner. Upon information and belief, MBJ conveyed the following statement to Defendant Wilson: "Don't shoot. I don't have a gun. I'm unarmed."

The lawsuit goes on to say that Wilson admitted to his supervisor Brown had his hands up, that he destroyed evidence by washing his hands and bagging his gun, and that he did so while in the presence of his fiance, who was his former supervisor.

The filing goes on to argue this incident was part of a pattern of "unconstitutional" treatment of African Americans in Ferguson, citing the Department of Justice report from March.

The suit is asking for compensatory damages in the minimum amount of $75,000, including the cost of mental health treatment, in addition to attorneys' fees.

"Plaintiffs loved MBJ, their natural son, and Plaintiffs have suffered extreme and severe mental anguish and pain and have been injured both in mind and in body," the document says.

Meanwhile Brittanie McSpadden says her sister Lesley visits Brown Jr.'s grave every other day, sometimes with her nieces and nephews.

"Sometimes, she likes to go alone."

Read the entire filing below: