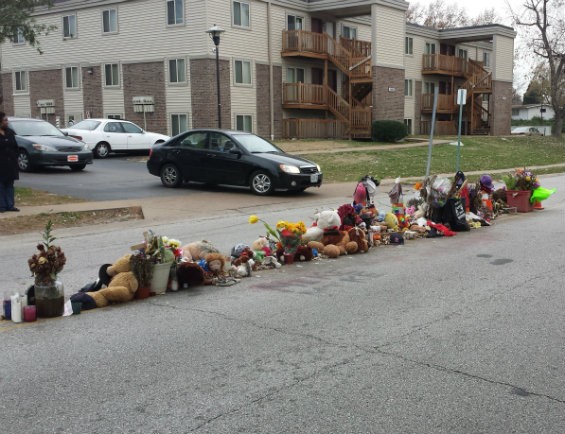 The spot in the street where Michael Brown died has become hallowed ground in the past eight months. A memorial there grew from a bunch of roses laid by his mother to a tall, narrow pile of stuffed animals, framed pictures, T-shirts, flowers and other trinkets. An even more massive memorial bloomed on a nearby lamp post.

Though it has attracted visitors from all over the world, some locals have grown weary of it.

"There's a lot of residents that are not happy with dodging a memorial in the middle of the street," says Ferguson mayor James Knowles. "We've had to try to plow around it in the winter months. We've had people, unfortunately, drive through them, whether it's purposeful or accidental. It creates a road hazard."

Last night, the issue was formally brought before the newly seated Ferguson City Council in the form of a letter from the Joint Council On Policy and Social Impact, requesting in conjunction with the Brown family that a permanent marker be laid and the current memorial cleared.

In a letter addressed to Knowles and the members of the city council, Janie Jones of the Joint Council wrote (emphasis ours):

In an effort to to conclude our discussions to expedite removal of the memorial, we respectfully request that the Ferguson City Council pass an ordinance to approve the installation of a permanent street marker to be embedded on Canfield Drive in the shape of a dove, and a historical roadside marker in the area of Florissant Road and Canfield Drive.

It is our recommendation that upon installation of the dove, the street memorial on Canfield Drive be removed.

Along with the Joint Council, an anonymous donor has apparently volunteered to pay for the new markers, as well as a year's worth of storage for the items that will be removed from the street. It's not clear how large the dove-shaped marker embedded in the asphalt would be.

Knowles says that he's had numerous conversations with representatives from the Brown family about a permanent memorial. Everything from renaming the street to building a median to actually digging up the spot where Brown died was discussed.

"They wanted to cut that section of street out and preserve it somewhere," he says. "We're trying to work with the Brown family."

Knowles says what will likely happen next is that discussion of the marker will go before the city's traffic commission, which is made up of seven or eight residents with one city-council liaison. Newly seated Ward 1 councilwoman Ella Jones will fill that role.

Knowles adds that decisions about the memorial will not be made hastily.

"I think we're going to need to really sit down and listen to what the residents have to say about the request. To have anything in the street, you know, may again draw people into traffic. Definitively the historical marker on the side of the street would be less problematic," he says. "There's a lot of events that happened in the last eight months. I think it would require...a very deliberative process to decide how we're going to capture the history of the last eight months."

Any discussion of the memorial will likely not be without controversy. Just this week, a separate memorial to Brown in a Ferguson park -- a commemorative tree -- was snapped in half and someone stole the marker stone. It had stood for less than a day. Dive into the comments on that post (the awful, awful comments) for just a taste of how some people feel about immortalizing Brown.

Members of the Brown family declined to comment on the memorial at this time.

Update: Daily RFT requested an interview with Jones through Jeff Small, the spokesman for the City of Ferguson, and received this message instead:

On behalf of Councilwoman Ella Jones, we are not going to be able to fulfill the request for an interview concerning the recently announced proposal to move the Michael Brown Jr. memorial. As you are aware, this is an extremely controversial matter which the City of Ferguson has been addressing over the last several months. There have been, and will continue to be discussions, and hopefully solutions. The proposal presented on April 21st, will be taken into consideration as we seek to find a more secure location.

When asked for clarification on what Small meant by a "more secure location," he wrote, "the City has met and spoken with many different individuals concerning the goal of finding a more secure location for the existing memorial, or for another memorial considered to be a more permanent display."

Lots up in the air. We'll continue to follow this story as it develops.

Here's the full letter from the Joint Council:

The request to install a permanent memorial for #MikeBrown and the events that started a movement.