Michael Brown Memorial Tree One of Two Destroyed in Ferguson 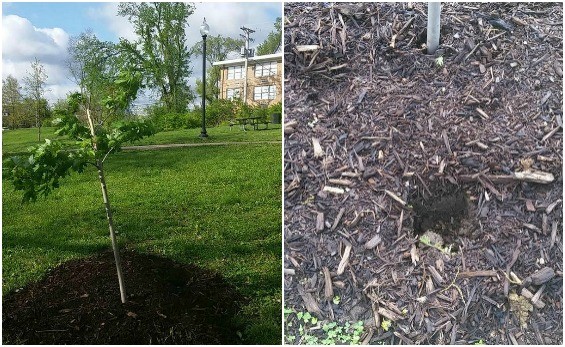 UPDATE: We've updated this story to include comments from a member of the Black Caucus' executive committee. See our update at the bottom of the post.

On Saturday, the Black Caucus of the American Library Association dedicated a memorial in January-Wabash Park in Ferguson honoring Michael Brown.

By Sunday, the memorial had already been destroyed -- the tree planted in Brown's honor damaged, and the stone memorial missing, KMOV (CHannel 4) reports.

As it turns out, however, two trees at the January-Wabash Park were damaged this weekend, and now two plaques are missing, says activist Tony Rice, who visited the site this morning. The tree featured in the KMOV report that was completely destroyed was dedicated to someone else -- the Michael Brown tree was damaged but still has some leafy green leaves on top.

However, both trees are missing their plaques. Brown's had said simply, "In Memory of Michael Brown Jr. Dedicated tree 4/15."

And here is a video shot by Rice, walking from the totally destroyed tree to the Mike Brown tree:

"I must admit, I'm a little confused," says Rice. "Maybe in the cover of darkness they realized they had the wrong one, but they already got it?"

Rice says he also walked around the area a bit to see if the vandals ditched either plaque nearby, but found nothing.

Regardless, the once sturdy-looking Mike Brown tree is about half the size it was.

"I can't understand why someone would want to cut down the tree," one resident told KMOV. "What, they want to start something back up again?"

This wasn't the first memorial to Brown to be destroyed in Ferguson. Previously, a makeshift shrine at the site of the shooting was destroyed, first when it was lit on fire and later when someone intentionally drove through it. Both times, protestors rebuilt the memorial -- even as a police spokesman infamously derided it as "trash."

UPDATE at 1:30 p.m. Makiba Foster, a librarian at Washington University specializing in American History, American Culture Studies and Women, Gender and Sexuality Studies is also a member of the executive committee of the Black Caucus of the American Library Association. She tells Daily RFT that the organization decided to plant the memorial because it's holding its national conference in St. Louis in August.

Some members wanted to pull out of St. Louis in the wake of Brown's shooting, but the caucus ultimately decided to stay the course. "This is happening all over the country," Foster says. "We realized we couldn't run to another city because this was happening everywhere. So we began to ask, 'How can we make an impact while we're here and do something that promotes peace?' We thought, 'What better way to memorialize Michael Brown's life than a tree memorial?'"

But the tree being chopped down wasn't just disheartening. It seemed like a sad metaphor for Brown's life, Foster says.

"This was a living thing, cut down. More than vandalism, it's violence," she says. "It was a young tree, cut down before it had a chance to grow, before it could reach its maturity. And that's the same thing we'd say about Michael Brown."

In the wake of this weekend's incident, some in the caucus urged pulling out of St. Louis for this summer's conference. But Foster says the group has again decided to stay the course. "We are not defeated in this," she says. "We are not pulling up stakes."

The truly disheartening thing, she says, has been reading comments on this very story. "It's one thing when it's a publication in New York. But to read these things and know you could run into these people on the streets --" she pauses, then says, "At the end of the day, a family is grieving, and a community is too. We thought the tree could be a symbol of hope."