Former St. Louis Cop: "Police Don't Care What Your Rights Are" During Protests

The words were chanted in the streets of Ferguson, blasted from car stereo systems and graffitied on the plywood panels covering store windows: "Fuck the police."

Yet amid the police shootings, mass demonstrations and intense media coverage of the past eight months, we've rarely had the chance to hear from officers on the ground, those men and women who stood silently on picket lines as protesters hurled invective and insults. Daily RFT's attempts to interview officers directly were repeatedly rebuffed. Occasionally, police chiefs and public relations officials updated reporters on general morale, but officers from the St. Louis region's various police departments largely closed their ranks to outsiders.

However, some former officers have chosen to speak out about their experiences on the force. Terrell Carter, now a minister, artist and teacher, served as a cop for the St. Louis Metropolitan Police Department from 1997 to 2002. This year, he published a memoir of his years policing St. Louis' streets, Walking the Thin Blue Line: A Police Officer Turned Community Activist Provides Solutions to the Racial Divide.

We sat down with Carter this week to talk about St. Louis' police culture and how he thinks police could have better handled the Ferguson protests.

Daily RFT: Among the most troubling moments of the Ferguson protests were the insults and threats directed at officers on picket lines — especially to black officers. As a black officer yourself, did you ever face a similar experience?

Terrell Carter: I got that on a regular basis, especially when I was the only black officer in a group, things like "You're a sellout," or "Why you working for the man, why you trying to impress white officers?" What I understood people to be saying was that they have been treated bad by police. I wouldn't say that they were being smart in all the things they said, because they clearly didn't understand exactly what was going on. But I also had to give them some credit as well, because sometimes officers were being morons.

Daily RFT: In your book, you describe how as a cadet you were taught that "anyone who didn't wear blue...could be the enemy." How did this mindset affect you?

Carter: The first idea for a police officer is that it's you versus everyone else. In the academy you're taught that there is a blue family, a police family and everyone outside of that family is an outsider. Truthfully, it did not matter if the officer was white or black.

Daily RFT: How did you see the "us versus them" philosophy playing out during the protests in Ferguson?

Carter: It was cranked up to such a high level because there is that foundation of us versus them. And then, many of the people who served in the Ferguson protests were part of specialized units, SWAT, and these are the gung ho men and women who have the most specialized training, who are the best shooters, so their attitudes are already amped up even more because most circumstances they go to are the really, really high stress interactions. You put them in a community like Ferguson where people are actually standing up to them and not just running away immediately and who are yelling at them... It's not fair for the officers, I get it is stressful and it can be perceived as a life or death situation. In those situations the police don't care what your rights are, they're the ones who make up the rules as they go along.

The way [for police] to navigate this is to acknowledge the way Ferguson was handled was handled wrongly, because it pitted the police against the community. It presented the community as these wild animals that need to be controlled and dealt with, instead of saying, "These are people who have legitimate concerns and they are expressing their First Amendment rights."

Daily RFT: One of the most striking passages in your book describes how you were taught to maintain complete control of a situation, to never let a suspect's hands out of your sight, for example. But the Ferguson protests were so chaotic, and at times it seemed that police made little distinction between the opportunists looting or burning stores and the non-violent people protesting nearby.

Carter: It's uncomfortable, because experience will teach you as an officer that the moment you don't have control, everything is going to go crazy, and it has been proven true every time. That's the antithesis of a protest. A protest is, "We want to do everything to bring as much attention as possible."

Daily RFT: Are you saying that this traditional "control first" model of policing just doesn't work in protest situations?

Carter: I think the whole system is screwed up, period. Not just for [protests], that's just the symptom of what's wrong with the way policing is done.

One of the problems that many police officers have is that they're never willing to ... I don't want to use the word back down, but to de-escalate. Because you can. A friend of mine, he's still a police officer, he posted on Facebook yesterday that "I can charm somebody into handcuffs without yelling or screaming at them at all."

Officers need to learn how to finesse the conversations they're having, to finesse the situations they're in. Yes, someone may be screaming at you as a police officer, but there's a way I was taught to de-escalate to get that person to a better place. Unfortunately, many officers don't want that, they feel like if you're yelling at me, then I'm going to show you that I'm bigger than you and I'm badder than you. 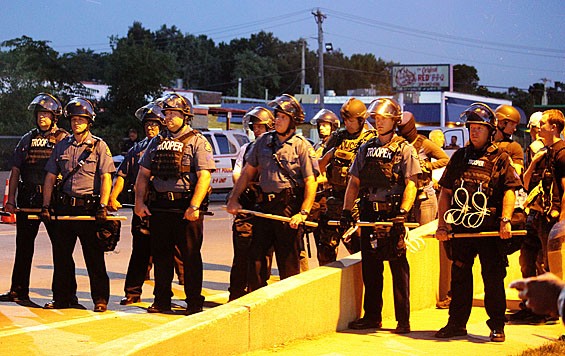 Daily RFT: Let's say you are in command during a protest situation in front of the Ferguson Police Department, and demonstrators are intermittently blocking the street and committing acts of civil disobedience. How would you handle it?

Carter: If people are in the street, it's a legitimate safety concern. As long as they're are on the sidewalk they can do anything they want to, but when they become an impediment to traffic, which I imagine there's a city and state ordinance against that, as soon as you violate that we have the right to arrest you. I'm not necessarily against police officers who arrest people who are blocking traffic, but all that does is ramp tensions up. Someone should be creative in their thinking.

Daily RFT: Where does this "creative thinking" come from? What should look like?

Carter: It would come from commanders because street patrolman can't do anything. A lot of it starts at the top. There's a culture in policing that has to be addressed. It can start at the bottom but that's not going to go very far.

This whole situation is bigger than what most of us have seen in our lives. I have not seen anything like this since what happened with Rodney King. When you have a circumstance like this, that is that important, it changes the rules of the game. Go down two or three blocks, block off traffic or divert traffic and send people in different directions. Let these people protest in the middle of the street for whatever time it takes.

Unfortunately, we have made history with this for the wrong reason. We could have made history because officers were creative and they worked to allow people to get their message out. It doesn't matter if you agree with it or not, your job as a police officer is not to agree with what a person does or believes, your job is to protect and serve, enforce the law and help people.

Daily RFT: Finally, what broader lessons do you think police should learn from Ferguson?

Carter: Number one, if there is a group of people saying something we should probably stop and listen, period. A lot of this would probably have been avoided if people would have believed citizens years ago. If people are making complaints about police officers or a unit or a department, we have got to pay attention.