Could Chrona Be the Key to Deeper Sleep? These Wash. U. Grads Say Yes 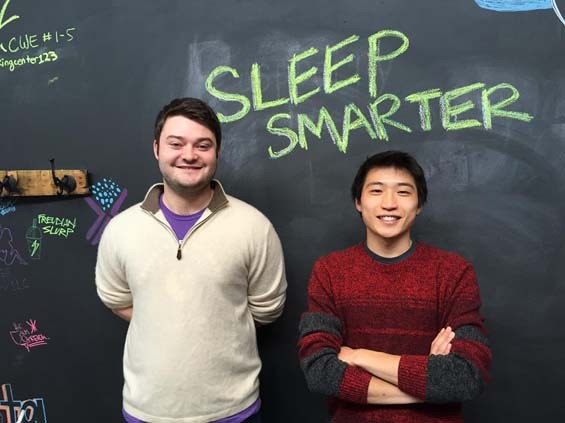 Zimin Hang and Ben Bronsther didn't set out to improve sleep. Like many entrepreneurs before them, the young Washington University grads merely thought they could measure it better.

They wanted to invent a device that would allow sleep research to be conducted in the patient's own bedroom. Instead of intrusive caps that require study subjects to spend nights wired up in a lab, what about sensor sheets that could be tucked beneath their pillowcases to measure sleep patterns? Perfect the technology, and researchers would surely line up, checkbooks in hand.

"We spent so much time and money on a patent to protect the technology that would do that," Hang admits. "The technology literally doesn't exist yet -- but we have the patent."

On the path to exploring such a device, though, the friends stumbled onto a far more interesting idea: What if instead of merely monitoring sleep, their sensor sheets could actually improve it?

That idea became Chrona -- a soft foam pad that slides between the pillow and pillowcase and, via smartphone, monitors brain waves and pulses sound waves at them. By activating those sounds during certain phases of sleep, Hang and Bronsther believe, they'll not only send users to a deeper sleep: They can keep them there longer, and ultimately ease them out, up and into their morning.

"We don't plan on making any medical claims," Hang notes. The government approval process is far too onerous.

But, says Bronsther, "by using Chrona, in general, you'll get better sleep."

Sleep, after all, is no longer entirely a mystery. Even as America tosses and turns, scientists have learned certain things about what gives the dreamlike state its powers, and what we can do to get there.

They know, for example, that "slow wave sleep" may be the most important stage to help the brain recover after a busy day. Many people who suffer from sleep disorders simply don't get to this stage -- or stay there long enough.

Researchers also know that certain sounds that can bring people to the slow-wave stage, and keep them there. These "binaural beats" have a powerful impact: If patients undergoing surgery are exposed to these pulsing tones, they need significantly less anesthesia. Recent studies have suggested a practical application for sleep-deprived consumers.

Bronsther and Hang developed Chrona to deliver just that. A quilted foam sheet that slides into your pillowcase, it conceals tiny speakers that pulse binaural beats at the sleeper. Monitors within the device help determine when the beats turn on and off for each individual sleeper.

The noises Chrona emits, the entrepreneurs believe, can be timed to pull the user both in and out of deep sleep so they rest thoroughly and wake refreshed. To show it can work, they're about to begin a sleep study at Washington University's Department of Radiology, working with Dr. Linda Larson-Prior, who focuses on the neurobiology of sleep.

But the technology is too good -- and the field too competitive -- to wait for results. Their startup Ultradia, based in the Central West End, is preparing to launch a Kickstarter this week to bring the device to market. They hope to have it ready for consumers by fall -- and anticipate a $169 price point. (Discounts will go to Kickstarter backers, with units going as low as $80.)

If everything goes as planned, they'll be the first to market a product that uses an acoustic device to trigger slow-wave sleep.

Down the road, the possibilities could be huge: Recent studies have shown, for example, a connection between slow-wave sleep and halting memory decline in the elderly. Could there be a practical application for Alzheimer's research?

Such speculation is premature, of course. But in the meantime, Dr. Larson-Prior offers a cautious affirmative as to whether Chrona has a practical application for the sleep-weary: "I think the answer has to be yes, although it is highly likely that benefits would not be universal as there are many reasons why sleep might be disrupted or disturbed."

The feedback that Hang and Bronsther are getting from friends and potential backers has been far less cautious. In these sleep-deprived times, everyone wants a magic bullet.

Says Hang, "One of our managing partners asked me, 'Why don't I have one of these yet?'" His response: "We only have five [prototypes], you can't have one!"

Both Hang and Bronsther are from the Washington, D.C., area, where they attended rival high schools, but they didn't meet until they landed at the same enterpreneurship class at Wash. U. Both as students and after graduating (Bronsther in 2013, Hang in 2014), they've dabbled in other entrepreneurial ventures -- Hang in bitcoin mining, Bronsther with badassbookworm.com and barparty.com.

For the last year, though, they've been all-in on their sleep venture. Ultradia now includes four engineers, all donating sweat equity to the project, plus a public relations rep.

Now they just have to show they can pull it off. Their hopes, and Ultradia's, rest on being able to show actual results, both from their Kickstarter and the study at the Dr. Larson-Prior's lab.

The pressure is on.

"My parents are traditional Asian parents," Hang says. "My mom doesn't even understand what a startup is."

Bronsther says, "My parents have been very supportive."

"My parents have been supportive too," Hang agrees. "But they want results." In this sleep-needy age, they might as well join the club.