In most small-quantity weed busts, it's normal for the defendant to plead guilty, pay a fine and move on. Case closed. However, Patrick M. Luchtefeld, a 32-year-old Trenton, Illinois, resident, believed he had been unfairly profiled when a Highland, Illinois, cop arrested him in September during a traffic stop. The officer allegedly found a small baggy of weed near the car's passenger seat and charged Luchtefeld, who was not driving, with possessing between 2.5 and 10 grams of marijuana.

Luchtefeld didn't take the charge lying down, saying he'd been profiled because of his tattoos and prior convictions. He got a lawyer and filed a request under Illinois' Freedom of Information Act to obtain a copy of the dash-cam footage of the arrest. He received four CDs containing the video several days later.

During the trial last month, Madison County prosecutors revealed they had no idea there was a recording of the arrest. Even stranger, the arresting officer, Charles Allen, testified that the dash-cam footage didn't exist.

According to the Belleville News-Democrat, after Allen gave testimony, Luchtefeld whispered to his lawyer, Thomas Maag, that the officer was wrong and that he actually had the recordings. By law, a defense lawyer in Maag's position should have had been given the footage.

Here's an edited-down version of the dash-cam footage obtained by Luchtefeld. It shows the officer questioning him near the rear of the vehicle, searching near the passenger seat and then arresting Luchtefeld.

Although the acquittal cannot be appealed, Madison County State's Attorney Tom Gibbons voiced his disagreement with the judge's ruling, insisting that Luchtefeld and his lawyer had all the evidence they needed.

"He did have the videos," Gibbons told the newspaper. "He had more of the evidence than we did."

At this point, it's still unclear who is ultimately at fault for bungling what appears to be a simple misdemeanor pot case. We've reached out to the Illinois State Attorney's Office, and we'll update if we hear back.

Update 12:45 p.m.: We spoke with Luchtefeld about the dash-cam footage, the trial and the suspicious series of events that began when Highland officer Charles Allen pulled over the 1992 blue Honda Luchtefeld was riding in for a having a loud muffler and no rear registration light. 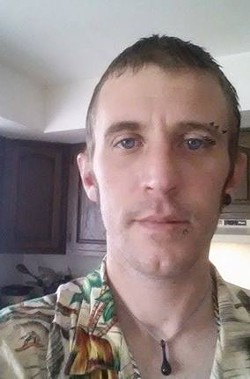 "There's a reason they didn't give the video to the State's Attorney," says Luchtefeld, who denies that there was any pot in the car. He alleges that Allen berated him for his piercings and tattoos and then fabricated the pot charge.

"This officer, he straight tells me 'You've been a piece of shit your whole life, why don't you just take the hit?'," he says. "I do have a lot of tattoos, some facial piercings, and this cop seemed more like a farm boy. In the interrogation he asked me 'What are you doing around here?'"

An airplane mechanic by trade, Luchtefeld remembers Allen testifying during trial that his patrol car's camera equipment was malfunctioning the night of the arrest.

"My lawyer made that cop look like an idiot on the stand," Luchtefeld says. "It's embarrassing on them. I guess they forgot that they gave [the recording] to me."

At the moment, Luchtefeld is weighing his options. He says he wants to sue but doesn't have the money to pay the legal costs.

"[The police] do what they want to keep themselves out of trouble, and it's bogus if you ask me," he says. "If they don't like you or they don't want you in their town, they'll do whatever they want."

Update 3:30 p.m.: Madison County State's Attorney Tom Gibbons tells Daily RFT that the the dash-cam footage was, at least initially, saved in the Highland Police Department computer system. Things went haywire, he says, when a staff member transferred the files from the department's normal evidentiary system to the separate system that holds files requested under the state's FOIA law.

According to Gibbons, the entire situation was basically a bureaucratic fuckup, and he maintains the the dash-cam recordings were misplaced, not intentionally hidden. He says officers are not responsible for transferring their own dash-cam footage to their departments' computer systems.

"This is really unique, I've never seen something like this," Gibbons says. "The officer wasn't disguising or hiding anything, it just got taken and put somewhere else."