Virgin America's Move to Branson Would Save Struggling Airport, But Is Actually Just Sad Joke 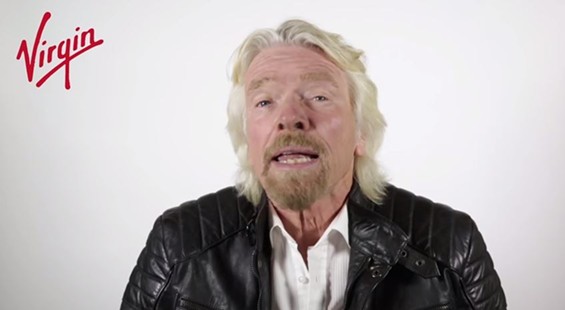 Considering April Fools' Day openly celebrates petty cruelty and casual deception, we thought we were already well-versed in how awful this "holiday" could be. We must admit, however, that the world's two most important Bransons are proving us wrong.

Indeed, it appears feathery-haired British tycoon Richard Branson has joined forces with the City of Branson, in order to gin up a marketing boost for Virgin Airlines and the tourist-dependent city of 11,000.

The plan was set in motion two weeks ago, when Richard announced in a blog post that he'd recently "discovered" his great-great-uncle, Reuben S. Branson, had founded the Missouri town in the early 20th century. He concluded by stating he was "looking forward to finding what opportunities there are for the Virgin Group in Branson."

The "opportunities" Branson referred to were revealed yesterday through another blog post, which trumpeted plans to move Virgin Group's U.S. headquarters and "a section of his UK operations" to a Missouri town whose live shows and natural beauty attract millions of visitors a year.

Made sense to open US HQ in town that bears my family name: Branson Missouri http://t.co/fj1EIG1BNM #BransontoBranson pic.twitter.com/Qibv0JgThY

A video was part of the not-so-truthful package as well.

But that's not all! Branson (the guy) added another heaping pile of bullshit in the form of several Branson-related offerings from his vast business empire, including: Virgin Active introducing a Branson-themed workout "that will have gym-goers tossing hay bales and rolling wagon wheels across the gym," Virgin Pure ensuring that the city's water supply would be "triple filtered and purified to make it healthy for all" and, to top it all off, naming Virgin America's newest plane Jolene in honor of Dolly Parton's Dixie Stampede.

Is any of this true? Probably not, but it appears that at least one claim has already caused significant confusion and disappointment. In the same blog post, Branson announced a new flight service to Branson (the city) from San Francisco. If that were true, it would be a major coup for the town's struggling airport, which was currently served by a tiny public charter airline, Branson Air Express.

An additional press release from Virgin America claimed the tickets would be going on sale later this week, with an added 10 percent discount for all Virgin America ticket purchases made by 11:59 a.m. PST today, which is, to reiterate, April 1.

In response to Virgin America announcement: "While we are obviously flattered that Richard Branson wants to fly his...

Incidentally, yesterday's announcement from Virgin Group also featured Branson (the city) mayor Raeanne Presley, who praised the new partnership, saying, "We welcome Richard Branson and the Virgin family with open arms. Branson is looking forward to becoming one of the world's must-visit destinations in 2015 and beyond."

We're just putting it out there, but Presley's involvement in publicly hoaxing her own city looks like a nice visibility boost so close to the April 7 election day, when she'll be asking voters to reelect for her for a fifth term as mayor.