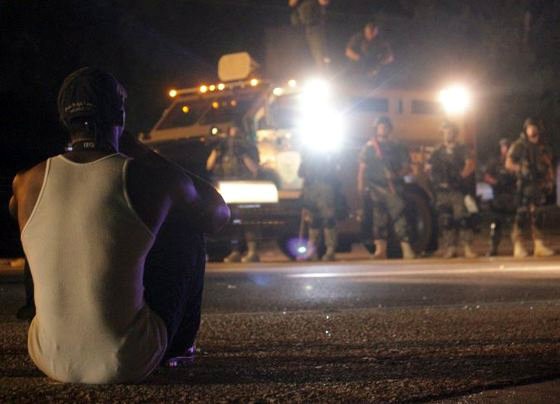 Four journalists are suing the St. Louis County Police Department in federal court over their August 2014 arrests in Ferguson, claiming that their First Amendment right to freedom of the press was violated.

The plaintiffs are Ryan Devereaux, a staff writer at the Intercept; Lukas Hermsmeier, a freelancer reporting for Germany's BILD newspaper; Frank Herrmann, a U.S. correspondent for a group of German newspapers; and Ansgar Graw, senior political U.S. correspondent for Die Welt and Welt am Sonntag. All four were arrested in the early hours of August 19, 2014, ten days after the shooting of Michael Brown. At the time, tensions were still high as protesters came out nightly to West Florissant Avenue, and police were using tear gas and rubber bullets.

"I was really taken aback by the way that protesters and the media were handled from the moment I got there, by the police," recalls Devereaux, who is based in New York City. "I felt that in many circumstances the police were behaving irresponsibly, and at times dangerously, toward media and protesters alike."

Devereaux and Hermsmeier were together when, according to the lawsuit, police began firing tear gas canisters in their direction. Devereaux was able to take a photo of one:

This appears to be one of the canisters just fired. Still hot pic.twitter.com/MsKiYCZpQ1

They ran down a side street off of West Florissant and found themselves cut off from the route back to their car. Here's how Devereaux explained what happened in an August 19 blog post about his arrest (emphasis ours):

We stepped out of the shadows, our hands in the air, and began yelling, "Press!" and "Journalists!" and "We're media!" over and over. An officer on top of the vehicle turned his light on us. After a pause, he beckoned us forward. We continued walking, our hands still in the air, still shouting that we were journalists.

With rifles trained on us, we turned right on Highmunt Dr., in the direction of W. Florissant and toward another police vehicle, which had more guns pointed at us. As we made our way forward, I heard a pop and felt a stinging in my lower back. I jumped up instinctively, and realized that the officers behind us, the ones who had asked us to move forward, had shot us with what I believe were rubber bullets. I was hit once and Hermsmeier was hit twice.

The two reporters dove behind a car, where the officers found and arrested them.

David Carson, a photographer with the Post-Dispatch, was embedded with the officers who arrested Devereaux and Hermsmeier. He took several photos of the arrest and even tweeted to Devereaux's bosses to let them know what happened:

According to the filing, police arrested Graw and Herrmann after they questioned the "keep moving" order that said nobody could stand in one place during the protests. All four men were charged with "refusal to disperse," though none has been prosecuted. All of the plaintiffs claim their zip-tie cuffs were so tight that they lost feeling in their hands, causing numbness lasting until this day, in Devereaux's case. Officers also allegedly told the reporters that their work was giving Ferguson a "bad rap," and that they were "telling lies about Ferguson."

The lawsuit says that the St. Louis County police officers (none of whom are named) violated the journalists' First Amendment rights to free speech and freedom of the press, and Fourth Amendment right to be free from unlawful searches and seizures, excessive force, and arrest without probable cause. The suit is seeking damages, lawyers' fees and an injunction that would prevent the police department from "using illegal and unconstitutional means to prevent Plaintiffs and other members of the press access to policing activities in connection with public speech and assembly."

A spokesman for the St. Louis County Police Department referred our request for comment to the county counselor's office; a message left there was not returned.

"I think that it's important to stand up for journalists' rights in the U.S. and abroad. This case seems like an obvious case in which we needed to say something," says Devereaux. "I stand by this lawsuit."