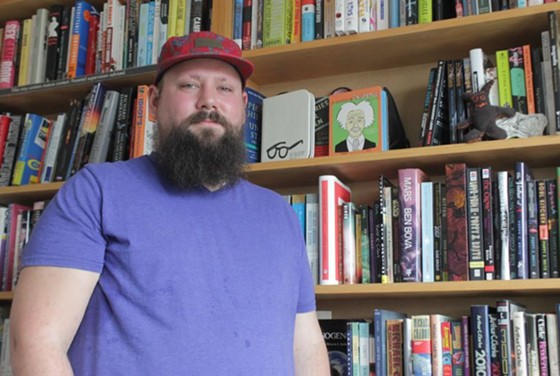 "The minute that I read it, I ran and immediately read it again out loud to my partner," says Rourke, founder of locally based, gay erotica publisher Queer Young Cowboys. "The writing was so strong. I was just like, 'You have to hear this story.'"

That was 2010. Two years later, as Rourke was just getting Queer Young Cowboys up and running, Li was among the first authors he reached out to as he sought new projects. It wasn't until 2014 that Queer Young Cowboys finally published Like They Always Been Free, Li's first ever short-story collection. The time and effort paid off, as the collection is now a finalist for the 27th annual Lambda Literary Award, for "Best Gay Romance." It's an accomplishment made all the more significant by Rourke and Li's somewhat confrontational stance toward the traditional romance genre. After all, the publisher's tagline is, "books about dudes who fuck dudes."

For years, Rourke has penned gay erotica stories under the name Johnny Murdoc. While his work has made it into several anthologies, he's found himself increasingly drawn to the world of book publishing. Rourke noticed there just weren't many people willing to promote the kind of literary smut he enjoyed reading and writing.

"I wanted to find the writers that were doing that, to shift from straightforward erotica into exploring sexuality in general," he says.

Rourke chose the name for his upstart publishing house after reading an interview that referenced the gay pulp writers of the '50s and '60s -- they were known as the "queer young cowboys."

It seems fitting that Rourke, who grew up in the conservative bastion of Jefferson County, now uses Queer Young Cowboys to publish books that fuse the porny delights of old pulp paperbacks with a highbrow obsession for technique and storytelling.

Most of Li's stories in Like They Always Been Free eschews hand-holding exposition or clunky pretenses. Pointed impressions, memories and commitments drive these characters into strange beds and, in one story, to a strange new planet.

Granted, in the first paragraphs of "Closer To The Sky," a character gets jerked off in a parking lot, and later enjoys some no-holds-barred beach sex that's graphic and descriptive enough to get your blood pumping, if that's your thing.

Li, a 45-year-old freelance office worker living in North Carolina, says there's so much more to great love stories than just thrusting and grinding your two main characters together, while making sure they conquer the obligatory relationship speed bump. In a way, Li sees writing man-on-man stories as a vehicle for breaking the stereotypical romance mold.

Li's work, however, contains all sorts of strange surprises. Several of the stories in Like They Always Been Free are virtually devoid of sex. The title story is a hallucinatory, first-person tale set in an unknown future, where two men of different social castes (or possibly species) are sold into slavery and rescued. Another story describes the bleak yet intimate bond between a prostitute and a drunk.

A standout piece, "Shark Bait," follows a man who turns into shark at the full moon and follows the scent of hot dudes around Martha's Vineyard.

Li admits that her stories' variety made her nervous when submitting the collection for the Lambda Award Gay Romance category. It's not an easy book to explain in a dust-jacket blurb.

"I worried about the romance category, because I know a lot of people like their romances to be pretty -- and to be fair, some of these stories don't even come close," she says. "But all sorts of people fall in love in all sorts of ways, and in all sorts of circumstances, too. So, I guess what I'm trying to say is that some love stories are easy, and those are great stories. But some love stories aren't easy at all -- and for me, at least, those can be great stories, too."